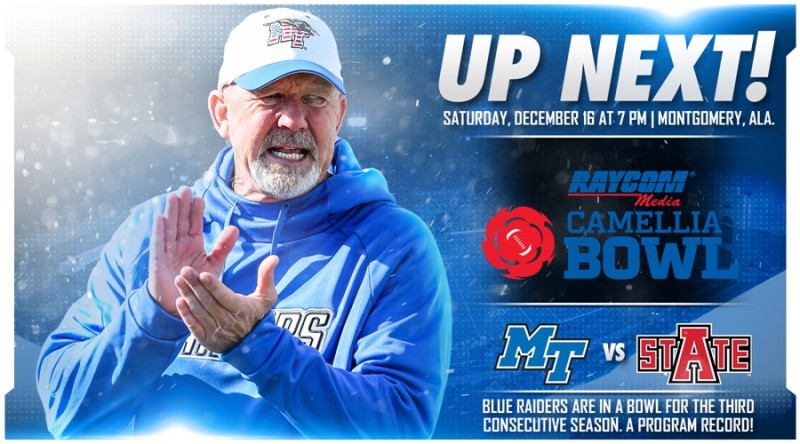 The Middle Tennessee Blue Raiders are going to their seventh bowl game in the Rick Stockstill era and fourth in the last five years.

Middle Tennessee was officially extended an invitation on Sunday for Stockstill's Blue Raiders to represent Conference USA in the Raycom Media Camillia Bowl on Dec. 16, 2017. It will mark the seventh bowl game of the FBS (I-A) era for Middle Tennessee and the 11th bowl game in school history.

The game against the Arkansas State Red Wolves will kick off at 7 p.m. (CT) from the Cramton Bowl in Montgomery, AL. The game will air nationally on ESPN.

"We were absolutely thrilled when we received the phone call late this afternoon to extend our season and face an old rival," said Director of Athletics Chris Massaro. "I have heard nothing but great things about the Camellia Bowl and the people of Montgomery and their hospitality. We really need to have our fans come out in full force and make the short drive because showing strong support at bowl games is critical for future bowl opportunities.

"I really want to also thank Commissioner Judy MacLeod and the league office for their diligent work in finding us a bowl spot. It was great that our league had 10 bowl eligible teams but my heart aches for the other 6-6 teams left behind. It's a terrible feeling."

This marks the fourth year of the Camellia Bowl which is played in the historic Cramton Bowl and will pit two familiar foes. The Blue Raiders and Red Wolves have met 14 times with MT holding a 9-5 advantage in the series. MT and ASU played 12 times as members of the Sun Belt Conference from 2001 to 2012.

"We are honored to be representing Conference USA in the Camellia Bowl," said Middle Tennessee Head Coach Rick Stockstill. "I am excited for this team and our senior class. They have fought through a lot of adversity this year and to be rewarded with a bowl game is well deserved. We can't wait to get there."

The Blue Raiders (6-6) enter the postseason having won three of its last four games. The Blue Raiders went 4-4 in C-USA play and upset ACC foe Syracuse on the road out of conference.

Fans need to purchase tickets through the Middle Tennessee ticket office by calling 1-888-YES-MTSU or logging onto GoBlueRaiders.com.

The Blue Raiders will return to practice on Thursday (Dec. 7) and will leave for the bowl game on Dec. 12.

For all the latest information on the Blue Raiders' bowl trip, please visit Blue Raider Bowl Central on GoBlueRaiders.com.