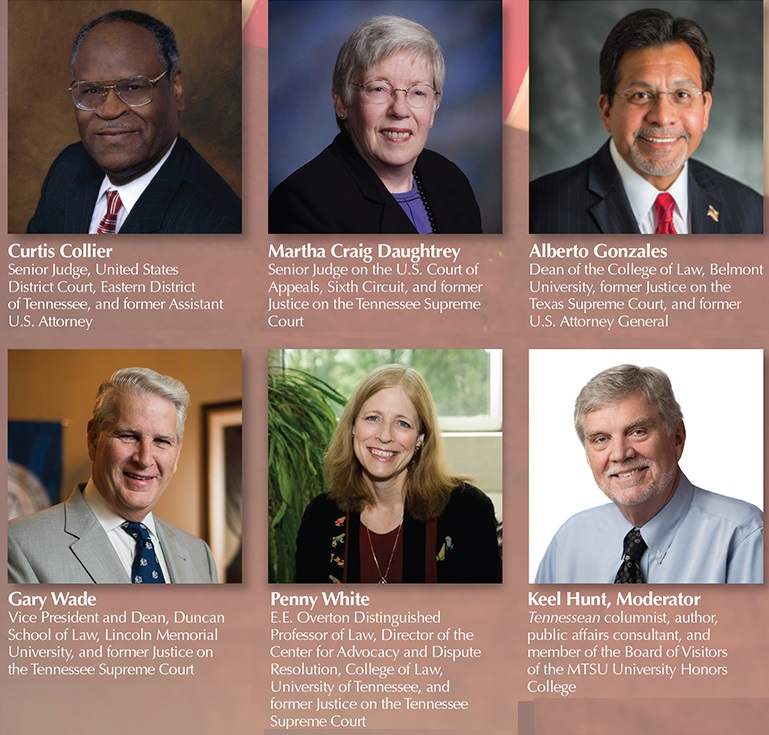 MTSU is calling on some of Tennessee's most esteemed judges Wednesday, Sept. 20, to wrestle with one of the most searing issues in America today: the constitutional role of an independent judiciary.

The university's annual observance of Constitution Day will feature a five-member panel, moderated by author Keel Hunt, in the Tennessee Room of the James Union Building from 2:30 to 4 p.m. Sept. 20.

Sept. 17 marks the 230th anniversary of the signing of the U.S. Constitution. MTSU is observing it three days later to encourage more student and community participation.

The MTSU discussion, which is sponsored by the campus chapter of the American Democracy Project, is free and open to the public.

MTSU faculty and students will submit questions for the panel to address, and the group also will answer questions from the audience.

These distinguished guests are the latest in a string of Constitution Day speakers and events that have enlightened the MTSU community since 2005, including civil rights activist and Nashville sit-in participant Diane Nash; the Revs. C.T. Vivian and James Lawson Jr., civil rights activists who spoke on the Voting Rights Act; longtime Iowa congressman James A. Leach, former chairman of the National Endowment for the Humanities; National Public Radio legal affairs correspondent Nina Totenberg; a special on-campus session, via the Supreme Court Advancing Legal Education for Students program, of the Tennessee Supreme Court to hear three appellate cases; and even a special U.S. naturalization ceremony for 300 people taking the oath of citizenship inside MTSU's Murphy Center.

"We've had the last couple of Constitution Days focused on civil rights issues, memories from the civil rights era, the parts of the constitution that had to do with justice for all, and after all is said and done, really the very core of what the constitution is about is the establishment of how our government functions, its three major components: the tripartite system of checks and balances that our framers, our founding fathers, built into the system," said Mary A. Evins, an associate research professor at MTSU's University Honors College and coordinator for MTSU's American Democracy Project.

"And it seemed as though this year, with some aspects of the executive (branch) feeling chaotic and some aspects of the legislative (branch) feeling as though it's in stalemate, that maybe this was a year to focus on that other pillar of our constitutional system, which is our judiciary. ... These eminent judges come from different backgrounds, they were appointed to their positions by different presidents or governors, and they will have different views of the law, so we think we can have a pretty lively discussion."

The university celebrates the Constitution's 1787 signing every year with special events and programs, including voter registration drives and readings of the document by students, faculty, staff, special guests and volunteers across campus throughout the day.

A campus parking map is available at http://tinyurl.com/MTSUParkingMap, and off-campus visitors can park free in the Bell Street lot, located across Middle Tennessee Boulevard from the JUB.