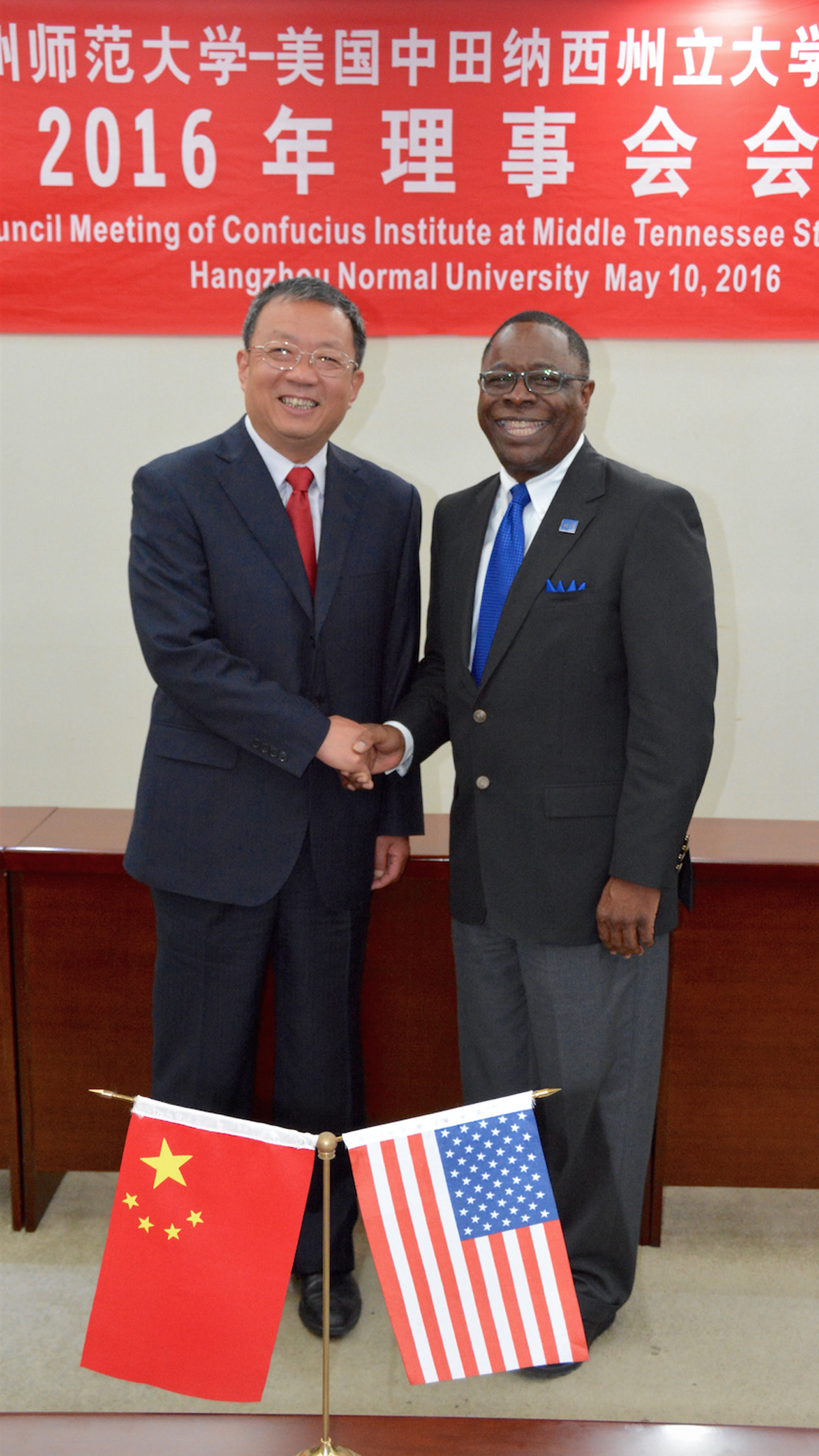 Du Wei, president of Hangzhou Normal University in China, left, and MTSU President Sidney A. McPhee exchange pleasantries at the conclusion of a meeting Tuesday, May 10, of the board that oversees MTSU's Confucius Institute. (MTSU photo by Andrew Oppmann)

Middle Tennessee State University and Hangzhou Normal University, already partners in the operation of a Confucius Institute on the Murfreesboro campus, took steps Tuesday (May 10) to strengthen the relationship.

HNU President Du Wei, speaking during the annual board meeting of the joint institute, said his university would send graduate students to MTSU to work at the new Center for Chinese Music and Culture and attend master's-level classes.

The center, which opened in March in MTSU's Andrew Woodfin Miller Education Center with great fanfare from both universities, was made possible by a $1 million gift from Hanban, the worldwide network of the Confucius Institutes.

"These students will work for the center and, with your blessing, we will pay for them to take courses and have a unique academic experience," Du said.

HNU will also donate more than 50 different Chinese music instruments for use and display at the center, Du said. Also, he added, HNU faculty members will regularly visit Murfreesboro to perform in Chinese music ensembles organized by the center.

Meanwhile, MTSU President Sidney A. McPhee also used the board meeting to announce the establishment of four full scholarships for HNU students to study on the Murfreesboro campus.

In addition, a "true exchange program" has been established with HNU's Alibaba Business College and MTSU's Jennings A. Jones College of Business. In the summer, a group of MTSU students will come to HNU for the "international business" study-abroad program led by Jones College Associate Dean Kim Sokoya.

MTSU Confucius Institute Director Guanping Zheng said the new program will allow students and faculty in business and computer sciences from both institutions to travel to the different campuses.

"Our partnership continues to grow and produce further opportunities for educational and cultural enrichment," McPhee told Du. "We treasure our friendship with Hangzhou Normal."

Confucius Institute, named after the ancient Chinese philosopher Confucius, is sponsored by China's Education Ministry to promote Chinese language, history and culture through tours, exchanges and university partnerships. There are more than 440 institutes in 120 countries.

McPhee and Du signed a five-year pact in 2014 to extend operations of the Confucius Institute at MTSU. The extension of partnership means $1 million in grant funding over its 10 years.

MTSU Center for Chinese Music and Culture Director Mei Han outlined her goals, saying HNU's gift of instruments will help her organize music ensembles that will help grow interest in Chinese music and visibility for the venture.

"We are going to use music as part of language learning," she said. "This gift, along with the visiting professors, will help us build an audience base that will be crucial to the success of the center."

MTSU will employ graduate assistants in history and music to help operate the center and assist in outreach to local schools and community groups, Han said.

"That is a very good idea," Du offered.

Zheng reported that MTSU's institute successfully negotiated with Tennessee's Department of Education to secure credentials for the volunteer Chinese language instructors provided by the institute, allowing them to teach for school credits.

He said the institute will soon release instructional modules for primary and secondary teachers who offer Chinese cultural or language instruction.

"We have been ranked by Hanban at the very top for our educational and cultural outreach," Zheng told the institute's board.

McPhee's visit to China will include stops at several partner institutions, as well as a lecture at an international conference in Nanning to present MTSU's ongoing research on the study of traditional Chinese herbs for medicinal purposes.

Under McPhee's presidency, MTSU's international student enrollment has more than doubled and has about 40 exchange agreements with about 20 institutions around the world.