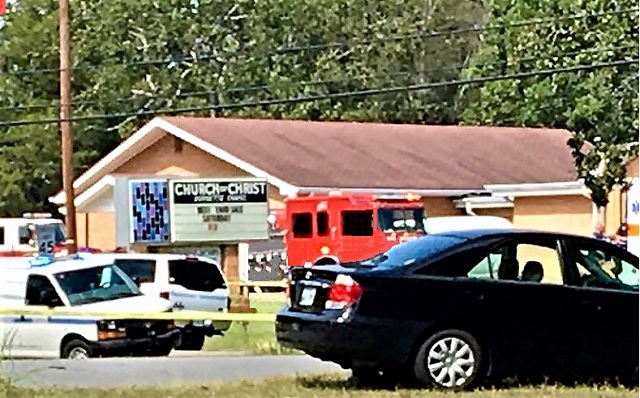 Just barely over the Rutherford County line in Davidson County, a Smyrna woman was killed at Burnette Chapel Church of Christ on Pin Hook Road and six were injured when a Murfreesboro reisdent went on a shooting spree. The tragedy occured around 11:15 Sunday morning (9/24/2017). The suspect was apprehended, and reportedly arrived legally from Sudan 21-years ago.

39-year old Melanie Crow Smith of Smyrna reportedly was walking to her car when shot by a masked intruder. Paramedics pronounced her deceased at the scene. She was a single mother with two children.

60-year old David Spann, pastor of the church, was shot and is in critical conditin at Vanderbilt Medical Center. There others are also at Vanderbilt and all in stable condition: 68-year old Linda Bush, 83-year old William Jenkins, and 65-year old Peggy Spann.

Katherin Dickerson and Caleb Engle, the church usher who wrestled the suspect to the ground, are both in stable condition at Skyline Medical Center.

Church usher, 25-year old Caleb Engle, was armed when he wrestled Samson to the ground. In the fight, the usher received head wounds from being pistol whipped by Samson. He is being called a hero by the congregation.

La Vergne Mayor Dennis Waldron said, "Our thoughts are with the victims and families at Burnette Chapel Church of Christ. A place of peace should never be a scene of violence."

Witnesses told Metro Police that 25 year old Emanuel Kidega Samson (mugshot on left) was waving two pistols as he walked in the front door to the sanctuary, and started shooting. Seven others were wounded. Reports indicate that five were rushed to Vanderbilt and two to Skyline Medical Center.

The suspect, Emanuel Kidega Samson, was treated and released from Vanderbilt Medical Center. He is now in the custody of the Metro Police.

The gunman was living in Murfreesboro, and he is said to have legally arrived in the U.S. from Sudan in 1996.

Once Burnette Chapel church members heard the name of the suspect, they quickly remembered that Samson attended their services a few years ago.

Metro Police indicate that Samson was waiting in the church' parking lot in a blue SUV and allegedly was wearing a neoprene half face mask.

Samson reportedly came across Melanie Crow Smith in the parking lot and killed her while she was walking to her car. Then he walked inside the sanctuary and opened fire.

Again, Metro Police have Emanuel Kidega Samson in their custody.