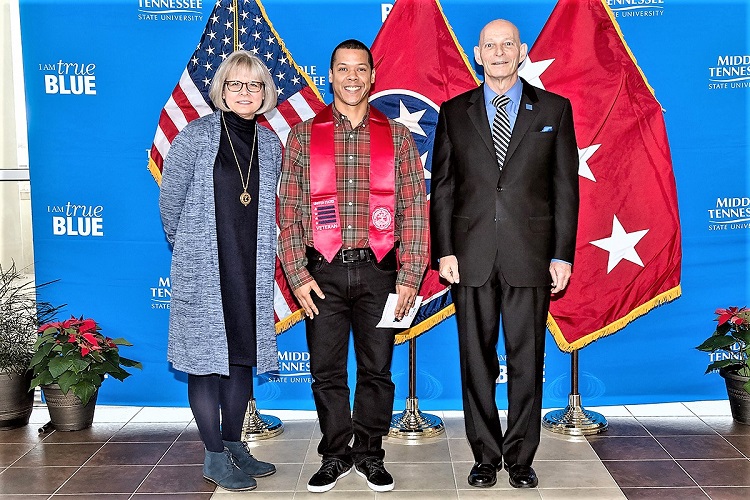 Jay Strobino was shot 13 times in one-on-one combat with an enemy soldier while serving in the U.S. Army in Iraq in 2006. The right side of his body -- leg, forearm, lung, chest and neck -- were riddled with bullets.

Strobino survived the ordeal and eventually retired from the Army. Twelve years later, the Connecticut native is married and living in Nashville, he works as a pharmacy technician, his clothes cover his scars and wounds and he cannot say enough about how the assistance of the Charlie and Hazel Daniels Veterans and Military Family Center will enable him to graduate in mid-December.

Corlew and country music legend Charlie Daniels co-founded The Journey Home Project, a nonprofit that supports veterans. The Journey Award is presented to an MTSU student veteran that has overcome significant adversity and transitioned into an unsung hero for student veterans and the Daniels Center.

It is awarded to a student veteran that has overcome significant adversity and transitioned into an unsung hero for student veterans and the Daniels Center.

During the one-hour ceremony, the university recognized student veterans for not only their service to their country, but for finishing their dream of obtaining a college degree.

About 30 graduating veterans received their red stoles, which they can wear during the upcoming commencement ceremonies Dec. 15 in Murphy Center. They are among a class of 86 student veterans who will be graduating.

"I'm still in shock," Strobino said of receiving the award that was a surprise until just after arriving at the center. "I was honored even before this award for what the Daniels Center has done for me."

Strobino, 34, was supposed to graduate in 2013 -- before there was a Daniels Veterans Center assisting an annual MTSU student veterans population of about 1,000, including family members. He kept hitting hurdles with intent to graduate forms and finding the right offices, so he delayed graduating.

Eventually, he was introduced to Keith M. Huber, MTSU senior adviser for veterans and leadership initiatives and a retired lieutenant general, and Hilary Miller, the center director. They helped him make the connections and complete the process. Strobino will graduate with a degree in exercise science and minor in biology.

Strobino, who received a Silver Star Medal for valor in combat, received a standing ovation from the audience after graciously accepting the award.

Juan Davila, 42, received the Leadership Award from Deb Sells, vice president of Student Affairs and vice provost for enrollment and academic services. He was a U.S. Marine Corps infantry platoon sergeant, who also served in Iraq and, like Strobino, "had several close calls" with the enemy.

"I wouldn't have gotten here by myself," said Davila, a native of Costa Rica, who acknowledged the support of his family (wife Danielle and daughters Emma, Isabela and Charlotte), professors, MTSU staff and Daniels Center, where he has been a stalwart in his own right, Miller said.

Accompanied by Annette, his wife of nearly 50 years, Glenn Whitefield of Lebanon, Tennessee, was the "elder statesman" at the ceremony. He will earn a second MTSU degree (professional studies/computer technology) after serving in Operation Iraqi Freedom as a member of the Tennessee Army National Guard. He earned his first degree, in aerospace, after serving in the U.S. Navy.

Miller gave the student veterans a commemorative coin, symbolizing continued contributions to the center and MTSU as alumni once they graduate.

Hiller Plumbing, Heating and Cooling and a number of other veteran-friendly companies sent representatives to the ceremony, in hopes of hiring the new graduates.