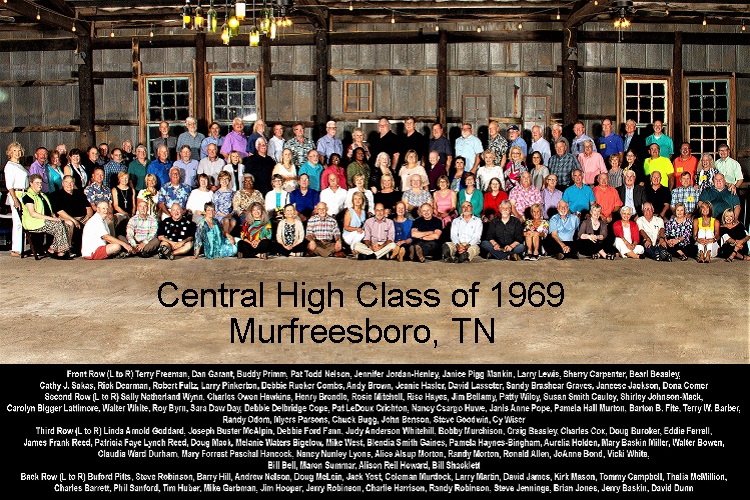 (MURFREESBORO) If you were in town on June 7-8, 2019, you probably heard roars from members of the Central High tigers class of 1969 who celebrated their Golden Anniversary!

Hayes continued, "The Class of 1969 is truly blessed to have so many generous classmates who were willing to contribute to the reunion, assist with reunion expenses, and keep costs to attend to a minimum."

Sponsors donated more $14,000 to support the 50th reunion that drew more than 200 class members and guests.

Although a rain forecast curtailed reunion activities planned downtown June 7, 2019, activities on the morning June 8 included a coffee at the Rutherford County Historical Society's Ransom Schoolhouse, a tour of Central Magnet School, a brunch at Central, and a "Celebration of Life" at CMS to honor deceased classmates.

"A highlight of the reunion was a very poignant 'Celebration of Life' in remembrance of those class members no longer with us," Hayes said. "Each deceased classmate's life was celebrated in a video created by Bill Shacklett (a class member) of Shacklett's Photography."

Class members and their guests celebrated the 50th reunion that night with dinner, music, dancing, and conversations at The Grove at Williamson Place with music provided by class member Larry Pinkerton and his wife, Gay.

Hayes noted, "Judging from comments and feedback from classmates, the Central High School Class of 1969's 50th reunion was an overwhelming success."

The chair gave particular credit to Sally Netherland Wynn, the class member who served as the reunion treasurer, for ending up with a balance to donate to the scholarship fund.

Hayes concluded, "We were very fortunate to have a well-qualified treasurer who ensured we stayed within our budget, kept meticulous spreadsheets and accounted for every cent donated and spent."

The Murfreesboro Central High Class of 1969 has awarded scholarships to 12 family members of alumni since 2004, with some recipients receiving more than one scholarship. Plans this year are to award two $1,000 scholarships with the balance of the reunion donation going into the scholarship fund for future awards.

The scholarship honors David Lassester, who has worked to keep class members in contact since 1969, including the creation of a class email list that now includes more than 200 participants. The MCHS Class of 1969 also has a website, https://www.tecomm.com/ClassNew.html, and a Facebook presence.