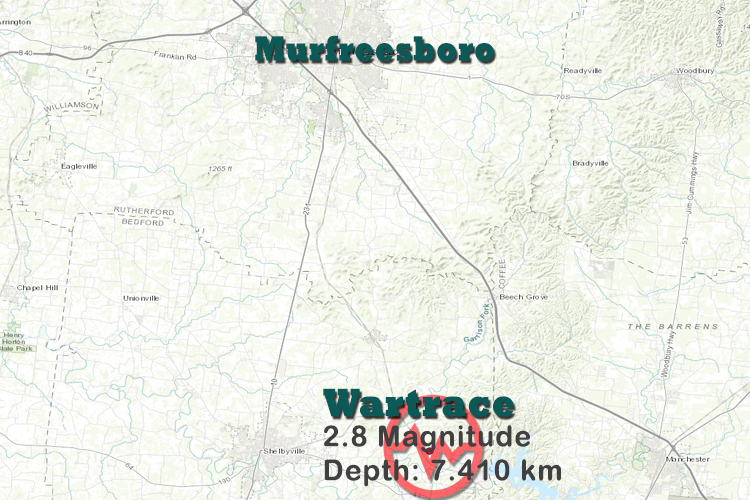 A small earthquake occurred on Tuesday night at about 8:37PM. Reports confirmed with the Center for Earthquake Research and Information Center show that the magnitude was registered at 2.8. The earthquake was only 3.2 miles southeast of Wartrace, Tennessee. Wartrace is in Bedford County near Bell Buckle. No damage was reported with the quake.

At 8:37:55PM Central Time on Tuesday night (1/15/2019) the U.S. Geological Survey recorded a 2.8 magnitude quake at a depth of 7.4 Km. That is a very light tremor, but it occurred near Shelbyville and residents in Murfreesboro reported feeling it.

The earthquake was only 3.2 miles southeast of Wartrace, Tennessee.

The agency classifies a quake of this magnitude as weak. In fact, it is not until the 2.5-2.8 range that makes it strong enough to be felt.

If you felt this quake, the USGS wants to hear from you. CLICK HERE for that site. As of 10:00PM Tuesday night, over 100 persons responded to the government survey. Shelbyville residents accounted for the largest number of reports filed (42). It fell dramatically for the second largest area, Bell Buckle had 10 reports, 8 were from Normandy, 7 in Wartrace, 6 in Manchester, 5 from Tullahoma, 3 reported feeling it here in Murfreesboro, and 1 from Unionville and Lewisburg.

In December, 2018 two earthquakes shook parts of East Tennessee within a 4-day period.

The USGS records show that 4-days earlier (12/8/2018), a seismic reading of 2.7 was recorded 8-miles from Sweetwater, Tennessee. By the way, Spring City and Sweetwater are about 30-miles apart.