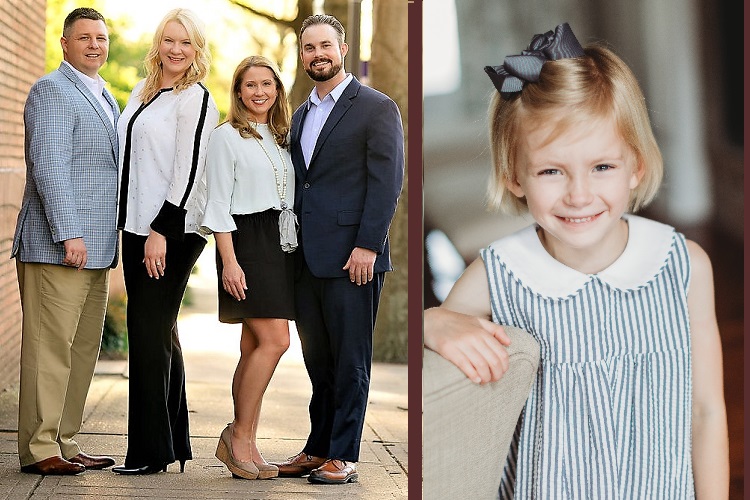 (MURFREESBORO) Kristen and Blake Finney and Courtney and Rob Wilder as the co-chairs for next year's 2020 Rutherford Heart Ball. Additionally, Heart survivor, seven-year-old Hadley East, daughter of Brock and Jenny East, named honoree of the evening.

Blake and Kristen Finney are long-time residents of Murfreesboro and are excited to work diligently to raise funds to fight heart disease and expand research in Rutherford County. Both alumni from Middle Tennessee State University, the Finneys call Murfreesboro home and enjoy being active in their community. Blake is an insurance agent for Shelter Insurance; Kristen is an interior designer and has her own company, Finney Interiors. They have a three-year-old daughter, Kennedy, and are members of New Vision Baptist Church.

Rob and Courtney Wilder have called Murfreesboro home since 2011. The Wilders and their children, Presley and Jack, love being part of the Murfreesboro community. Rob works in healthcare sales for Roche Diagnostics, while Courtney works as an outpatient physical therapist and is also an adjunct instructor at MTSU. They both enjoy working on community events and are thankful for the passion with which our community comes together to meet charitable needs.

This year's honoree, Hadley East, and her family are very close to the Finney's and Wilder's hearts. Hadley was diagnosed with a congenital heart defect at 20 weeks in utero. Hadley has endured two open-heart surgeries and is now a happy, healthy seven-year-old who loves to play soccer, basketball, gymnastics and dance.

"We have known Hadley since before she was born and have prayed over her daily. It has been amazing to watch how resilient she has been recovering from her heart surgeries. It is a joy to watch her play with our daughter and run on the soccer field. She is truly an inspiration to all," states Blake and Kristen Finney. They are no strangers to heart disease, as Blake's father recovered from a heart procedure in 2015, which greatly influenced their passion of educating others about the early signs of heart disease.

Rob and Courtney are also particularly thrilled to be involved with this year's Rutherford Heart Ball as Hadley is also near to their hearts. "We have known the Easts and loved Hadley since before she was born. We are so happy we get to see her grow beside our own children and are humbled to be able to honor her this year. Her story shows another way heart disease can present itself and impact families around us. We hope to bring attention to other avenues by which the American Heart Association is able to help the fight against heart disease, for example in research and development of new operative techniques for pediatric heart patients like Hadley," states the Wilders. Heart disease has also touched both Rob and Courtney's families, as well, with both of their fathers passing away unexpectedly from heart attacks.

For more than 40 years, the Heart Ball has supported the American Heart Association's mission of being a relentless force for a world of longer, healthier lives. The gala will be held on February 22, 2020.

About the American Heart Association

The American Heart Association is a leading force for a world of longer, healthier lives. With nearly a century of lifesaving work, the Dallas-based association is dedicated to ensuring equitable health for all. We are a trustworthy source empowering people to improve their heart health, brain health and well-being. We collaborate with numerous organizations and millions of volunteers to fund innovative research, advocate for stronger public health policies, and share lifesaving resources and information. Connect with us on heart.org, Facebook,Twitter or by calling 1-800-AHA-USA1.