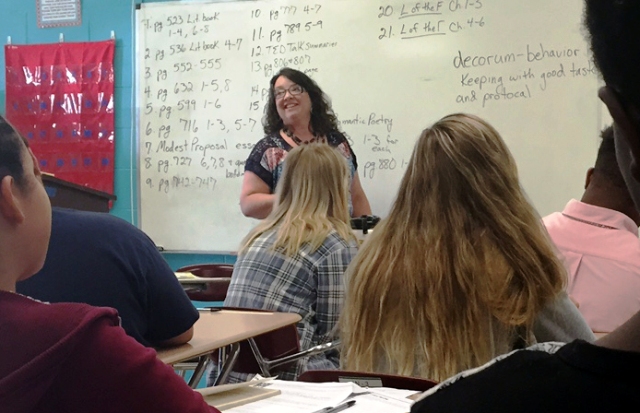 Photo ID: Teacher Geneva Cook leads an English IV class at Riverdale as part of the 2016 summer school session.
A milestone in the lives of thirty students was celebrated at 6:30PM Friday evening with the summer graduation of 30 students in a ceremony at Riverdale High School.
Ricky Anderson and Katelynn Rich shared their stories and reasons for enrolling in summer classes. Their goals are vastly different, and yet both stories conclude with the same ending -- graduating as part of the Class of 2016.
"Things didn't go so well at the end" of the spring semester, Anderson said, and so he attended summer English IV as a way to replace a poor grade. Meanwhile Rich, 16, enrolled in the same class taught by Geneva Cook to graduate a year early.

Classes met five days a week for three-and-a-half hours a day during an eight-week period.

Martin also said she ideally likes to keep enrollment to between 12 and 15 students per class. Smaller class sizes allow teachers and students to engage one-on-one more than is typically afforded during the traditional fall and spring semesters.

"I can focus more here (because) there isn't that many people in my class," said Anderson, who prefers summer school because of the "individual attention."

"I realize that I made the best decision I could have ever possibly made," said Rich, who also noted the "encouragement and care" of her teachers and the administration.

Another of their summer school classmates agrees. With regard to graduating a year early with Rich, she wrote, "All my life I feel I have (not) accomplished as much as I could have, but this makes me feel like I actually did something."

Martin, who used summer school as a way to graduate from Central High School a year early in 1972, has been the director of the summer school program for the past four years. She has been involved in other capacities for the past 18 years, she added.

The upcoming 2016-17 school year will mark Martin's 40th year with Rutherford County Schools. Like Rich, she graduated high school at 16 and was hired for her first teaching job at 20.

"I enjoy working in the summer because I was one of those, 'it's hard to go back after having time off,'" Martin said.

The same is true for some students -- the long summer break makes it difficult to return to the classroom in the fall. A single summer school class keeps them from losing focus and makes the transition to the next grade level easier, Martin explained.

It actually makes them "better students" in the fall, she said.