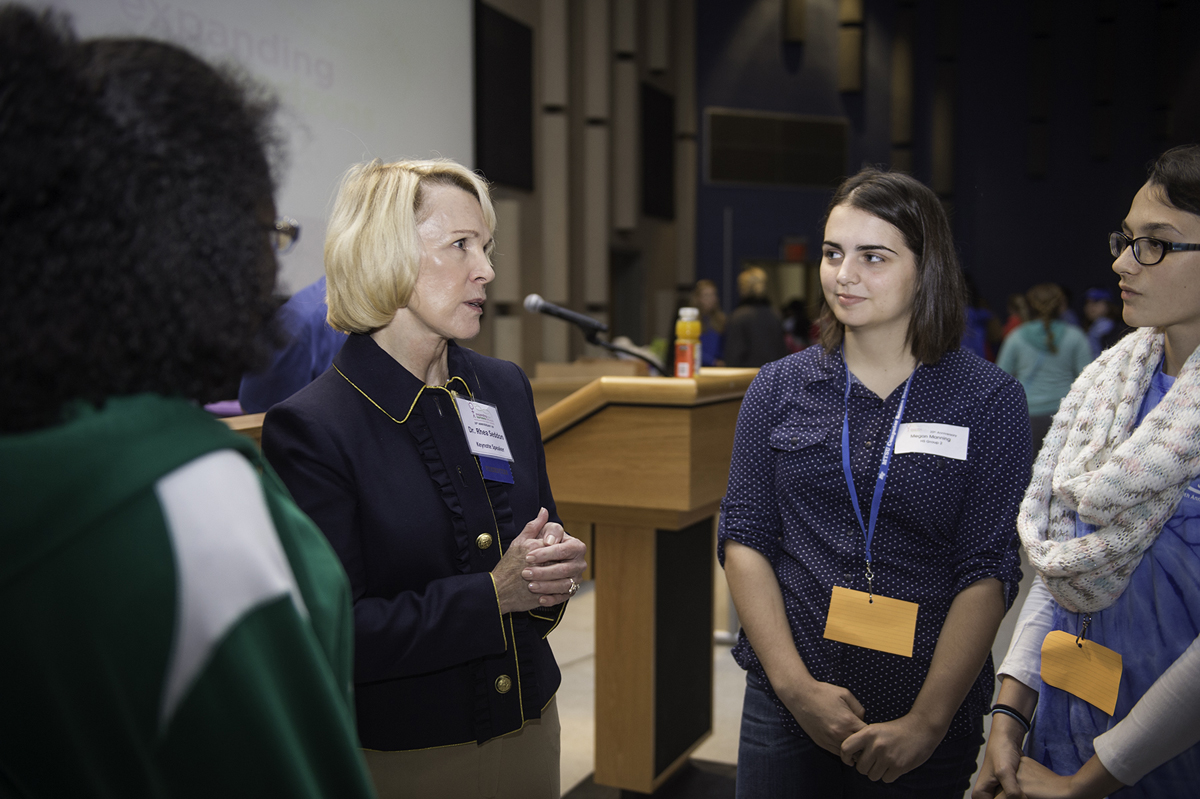 Keynote speaker Dr. Rhea Seddon did not realize it at the time, but her words were directly aimed at Zeina Ahmad and probably dozens more girls attending the 20th annual Expanding Your Horizons in Math and Science Conference at MTSU.

"I want to be an astronaut when I grow up," Ahmad said with a smile some 45 minutes after Seddon, a Murfreesboro native and retired hall of fame astronaut, finished her talk and question-and-answer session with the 320-plus girls attending the event Saturday (Oct. 22) in the Science Building and other campus venues.

Dr. Judith Iriate-Gross is a chemist at MTSU who taught girls in middle school about science...

Expanding Your Horizons, or EYH, at MTSU is held for girls and young women from across Middle Tennessee to investigate potential careers in math, science and the other STEM fields; to talk with and listen to women in science and math; and attend math and science workshops and participate in hands-on activities with girls also interested in these fields. To learn more, visit http://www.mtsu.edu/wistem/eyh.

Ahmad, a sixth-grader at Northfield Elementary School in Murfreesboro, provided brief answers when first asked about EYH and the "Computer Autopsy" workshop led by Melissa Flowers. But she lit up like a light bulb when asked about Seddon sharing about her career and all the education and determination it took to eventually become an astronaut flying millions of miles in space.

When asked what she recalled from Seddon's remarks, Ahmad said, "That she had a hard time going to college because she was girl." When asked what, if anything, she's doing to create a pathway to achieving her goal of being an astronaut, she said flying -- one of many avenues Seddon pursued along with college, medical school and eventually applying for and becoming a NASA astronaut.

"Always dream big, but have a backup plan," said Seddon, who is married to Robert "Hoot" Gibson, who was in her class of 35 wanting to become astronauts. "Learn from your mistakes. Have perseverance. When you get interested enough in something, that's called a passion. Have faith in yourself and you can succeed."

"You are here today," Seddon added. "You have many years to study. The whole world is waiting for you to make your decision."

By the numbers, the middle school and high school girls consumed 125 large pizzas (75 cheese and 50 pepperoni) or 1,250 individual slices, 768 bottles of water and 15 gallons of chocolate mile and 5 gallons of white milk from the School of Agribusiness and Agriscience dairy in Lascassas, Tennessee, and milk-processing plant on campus.

On Oct. 21 in the Science Building's Liz and Creighton Rhea Atrium, EYH organizers gathered to celebrate the 20th anniversary of the event.

Along with MTSU students, faculty colleagues and industry partners in STEM (science, technology, engineering and math), chemistry professor Judith Iriarte-Gross began EYH at MTSU for girls in 1997 (Seddon was the first keynote).

During the Oct. 21 celebration, EYH committee members presented Iriarte-Gross with a quilt featuring 17 of the 20 T-shirts given to students and volunteers during the past 20 years.