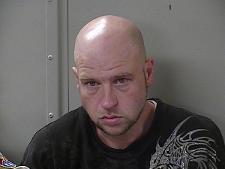 A Nashville man is facing a felony charge in Murfreesboro for the alleged sell of drugs in our community and contributing to the delinquency of a minor.

On Wednesday morning, police responded to Campus Crossing Apartments for a drug investigation. A resident of unit M-204 allowed police inside where several persons seated on a couch admitted to recently smoking marijuana together.

In the back bedroom, police officers located two juvenile females seated on a bed along with an adult male. That male along with a second standing at the foot of a bed, were escorted out of the bedroom where police recovered four one-gram bags of weed which were allegedly purchased by the juveniles from Joshua Bennett, the male who was standing at the foot of the bed.

Dabs of marijuana were allegedly found in the bedroom along with a "Large bag of marijuana" and a single ecstasy pill. A loaded 9mm handgun was also found on the bed about a foot away from Bennett, but no one claimed knowledge of the gun.

The two juveniles at the apartment told police that Bennett brought all of the drugs into the apartment to sell, according to a police report. The two girls also said that he allowed them to smoke "Dabs" for the first time. The females were 16 and 17 years of age.