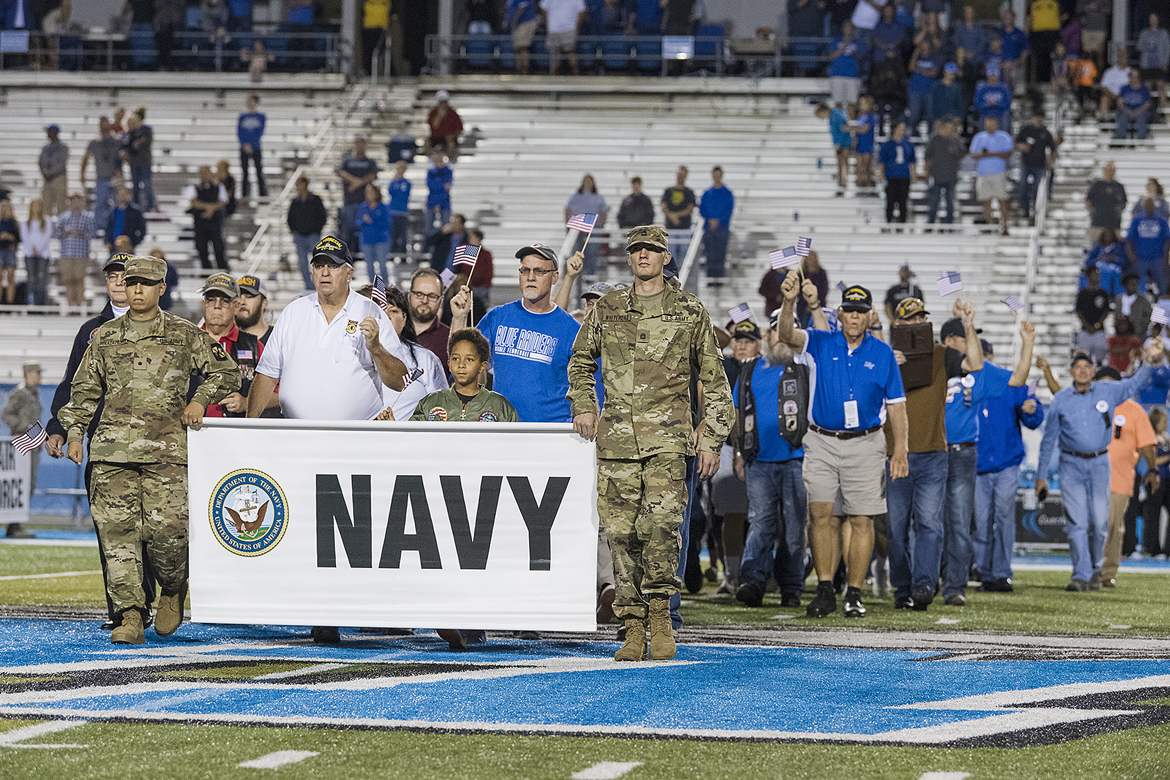 As the Band of Blue plays the Navy theme song, a group of veterans walk across the field in November 2017 during halftime the 37th annual Salute to Armed Forces game. (MTSU file photo by Andy Heidt)

Veterans from all eras will be recognized, but those from World War I will be featured Friday, Nov. 2, during the 37th Salute to Armed Forces during several pregame activities and also during the nationally televised Middle Tennessee-Western Kentucky Conference USA football game at Floyd Stadium.

The MT-WKU game has a 7 p.m. kickoff and will air on the CBS Sports Network and Blue Raider radio network. The Blue Raiders are 5-3 overall and 4-1 in C-USA.

Since 1982, as a part of the nation's annual Veterans' Day, MTSU has held events -- memorial service, Veterans' Picnic, Dr. Joe Nunley Award and patriotic halftime show -- all centered around an MTSU football game as the university recognizes the many heroes serving their country.

It marks the first time in 37 years the event will not be held on a Saturday. CBS Sports requested the Friday date to air the game. The public is invited to join in all of the activities.

Retired Rutherford County deputy mayor Jeff Davidson, also a retired U.S. Army Colonel, will be honored with the Dr. Joe Nunley Award at the conclusion of the Veterans Picnic.

The pregame picnic will be for all veterans and active service members. During the picnic, the Army Tennessee National Guard Band will perform.

Middle Tennessee is also teaming up with the U.S. Marine Corps' Toys for Tots program. At each gate, a Toys for Tots cart will be available for unwrapped, new or gently used toy donations.

For fans attending the game, if you do not have a complimentary ticket given to veterans and family members, you must purchase in advance or at the gate.