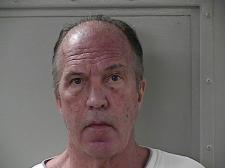 Around 5:30 Tuesday (1/23/18) morning, Murfreesboro Police responded to an attempted rape call on Shearron Ct off of Middle Tennessee Boulevard. Once on the scene they spoke with the reported 17 year old victim.

The teen said that the 63 year old suspect entered her room wearing "medical scrubs" after her mother fell asleep on the couch. The victim said that the suspect told her that he wanted to give her medical attention for a scratch on her back. She also told police that the suspect touched her between the legs and asked if he could "pleasure her."

Officers then turned their attention to the suspect who according to an arrest report, "Gave inconsistent and false statements." The report went on to say that John Douglas Brinsko, "Did finally admit that the victim was telling the truth and also admitted to touching her and asking her if he could pleasure her."

John Douglas Brinsko was charged with Aggravated Sexual Battery. He is due in a Rutherford County General Sessions Courtroom on February 27, 2018.

Brinsko's record of arrest shows that he is a "Health Safety Professional" on the MTSU campus and goes by the nickname of "Doug." The university website lists him as being an associate director.

The subject is currently free on bond.