640,958 hours of Pro Bono Attorney Work to those Unable to Afford it in Tennessee 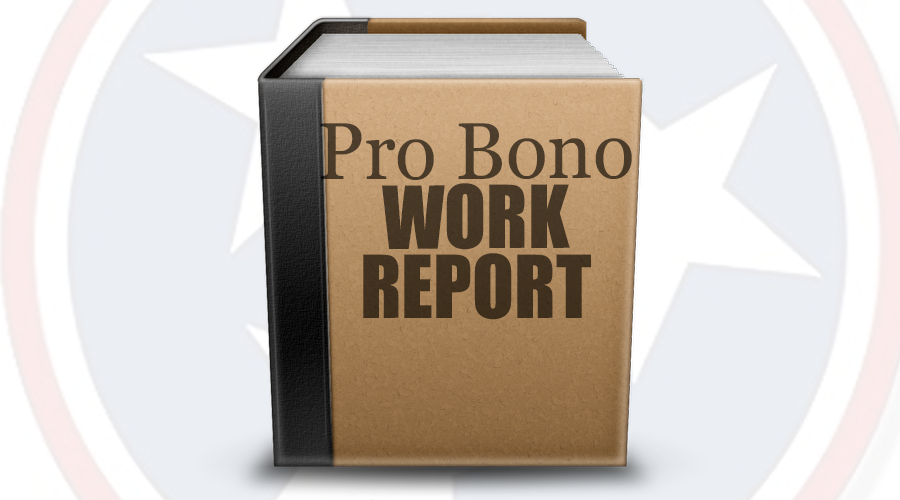 The Tennessee Supreme Court's Access to Justice Commission has released its annual report detailing the pro bono legal service reported by attorneys, bar associations, law firms, law schools, legal service providers, mediators, and other organizations. Pro bono is a Latin term meaning "for the public good," and attorneys working pro bono are often working for no, or a reduced, fee.

"Performing pro bono service is becoming part of the legal culture in Tennessee and the ATJ Commission could not be more pleased," said Justice Connie Clark, who serves as the Supreme Court liaison to the ATJ Commission. "Every day Tennesseans struggle with issues like eviction, expungement, protective orders, employment discrimination, and more. Lawyers are in the unique position to provide assistance when there is nowhere else to turn. Tennessee is consistently recognized on the national level as one of the top Access to Justice states."

According to the Pro Bono Report, 9,539 attorneys practicing in Tennessee provided 640,958 hours of pro bono service, an average of over 67.19 hours per reporting attorney. The value of these services is estimated to be over $137.8 million. Continuing a trend for the past six years, the majority of these hours (68.96 percent) were provided to persons of limited means without a fee or at a reduced fee.

For the first time in the history of the report, more than half of All Attorneys licensed in Tennessee, including both attorneys with primary addresses in Tennessee and attorneys with primary addresses outside of Tennessee, reported completing pro bono work. Overall, 51.15 percent of all attorneys licensed in Tennessee reported completing one or more hours of pro bono, a number reflecting a 4 percent increase from the prior year, when it was 47.11 percent.

The total hours of Pro Bono for All Attorneys licensed in Tennessee also shows the highest number ever reported at 749,217 hours. This number reflects an increase of 50,814 hours from the prior year, and an increased value of nearly $11 million of pro bono services.

"The numbers are just outstanding, but what really stands out to me is that the vast majority of time given is 'boots on the ground' - lawyers meeting with our state's most vulnerable populations, including single parents, the elderly, and veterans, to provide advice, write letters, and find solutions during legal clinics," said Gail Ashworth, chair of the ATJ Commission. "The ATJ Commission is working very hard with all of its partners to get services where they are most needed and we are making progress."

According to the report, single parents, ethnic minorities, and elderly persons are the most commonly served persons, and the percentage of respondents that served each of these categories of persons increased in this year's report. They were most likely to receive services at a legal clinic where attorneys were most likely to meet with them, provide advice, or review or draft a document. The issues they most often tackled were the ones that derail lives every day: those related to family law, domestic violence, consumer law, and juvenile/education.

Also, for the first time, the ATJ Commission was able to analyze data by county. The ATJ Commission was able to identify certain areas of the state where proportionally high numbers of Tennessee Attorneys reported completing pro bono. This information was then mapped to highlight the Top 20 Counties for Pro Bono using three different evaluation metrics. Three Tennessee counties (Lake County, Hancock County, and Van Buren County) reported that 100 percent of their attorneys provided pro bono, and 19 counties reported that 70 percent or more of their attorneys perform pro bono work.

The Tennessee Supreme Court announced its Access to Justice campaign in 2008 and subsequently created the ATJ Commission, which is composed of ten members from across the state. The ATJ Commission provides collaborative leadership to create solutions and resources that address and eliminate barriers to justice for all. The ATJ Commission will release its sixth Strategic Plan in 2020.

See the full Pro Bono Report here. More information about the Access to Justice Commission and pro bono opportunities can be found here.

Legal resources provided by or partnering with the Access to Justice Commission: