73rd Anniversary for WGNS--Thank You! 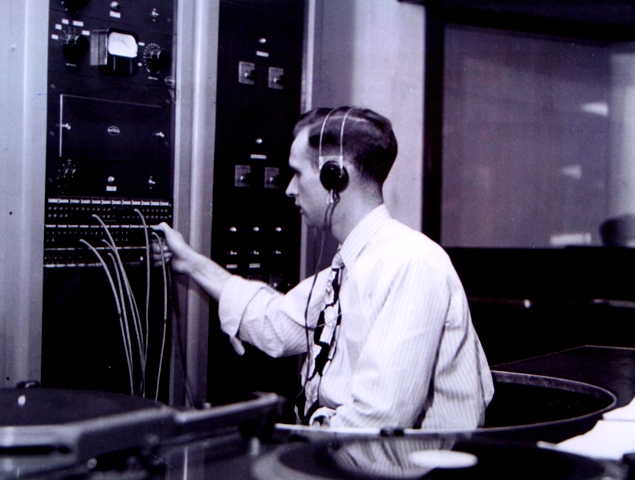 A Good Neighbor Is Born

As the New Year of 1947 approached, rural Rutherford County had a dramatically different feel than that of today.

Approximately 8,000 persons populated the entire county. It was a big thing for the county to get its first radio station!

Word is that on the night of December 31, 1946, throughout the county people were tuning their radio dials. At 10:00 o'clock the static suddenly vanished and a strong new signal appeared.

WGNS rang in the New Year of 1947. A popular song of the late 40's included the music goes round and round and comes out here. (photo: one of WGNS first engineers Glenn Snoddy, circa 1947) Here Glenn tweaks the controls that are in racks of equipment along the walls and makes everything come out clearly here!

In the early days of radio there were no miniature transistors or solid-state circuits. Large tubes that generated much heat caused all of the equipment to be large and complex.

With the innovation of transistors and miniaturization, equipment in today's radio studios is much smaller, more dependable and reproduces sound with perfect life-like fidelity.

Click here for an original article about WGNS signing onto
the airwaves in 1947. This article is from The Rutherford Courier.

WGNS continues to broadcast on AM 1450, but in March, 2007 WGNS put its hometown focused broadcasts on FM 100.5 and FM 101.9. When you add to that this internet site, there are five places to connect with Murfreesboro through your Good Neighbor Station...that's what the G N S in our callsign stands for.

Sports is a vital part of WGNS...both yesterday and today! 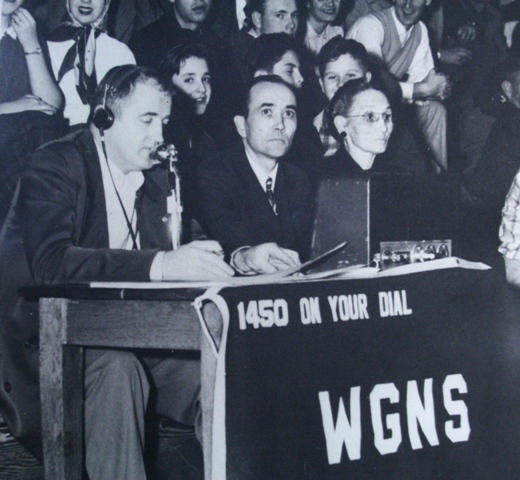 Just like today, local sports was extremely popular on WGNS. This 1947 basketball broadcast is from the gym at Central High School. (L-R above photo: Ray Duffey, Hollis Harris who started "Movies Under The Stars" locally, and his mother).

One of WGNS' first play-by-play announcers was Ray Duffey. His thick Boston accent made him really stand out. Ray became so popular that he became the first Director of the Murfreesboro Parks and Recreation Department.

Beside him is Hollis Harris and Harris' mother. That same year, Mr. Harris started the free Movies Under The Stars as the first function of this city's parks department. Hollis was the first employee of the parks department. It was several years before Ray Duffey left WGNS to become the first director of Murfreesboro's Parks and Recreation Department.

WGNS continues to be the Heart of Tennessee's Blue Raider Flagship, and as such produces 100% of the broadcasts in our studio. . Since 1947 WGNS has included live play-by-play of the local high school games. Plus, MTSU now has Tennessee's largest undergraduate enrollment.

Through the efforts of such greats as Monte Hale, Dick Palmer, Jeff Jordan, sports coverage on WGNS has expanded dramatically to include some elementary and middle school sports. Now, Bryan Barret continues the tradition. And of course, since 1981 WGNS continues to be your Atlanta Braves station.

And as we ring-in a new decade (2020), your Good Neighbor Station celebrates its 73rd Anniversary. Thank you for supporting local media for all of these decades.