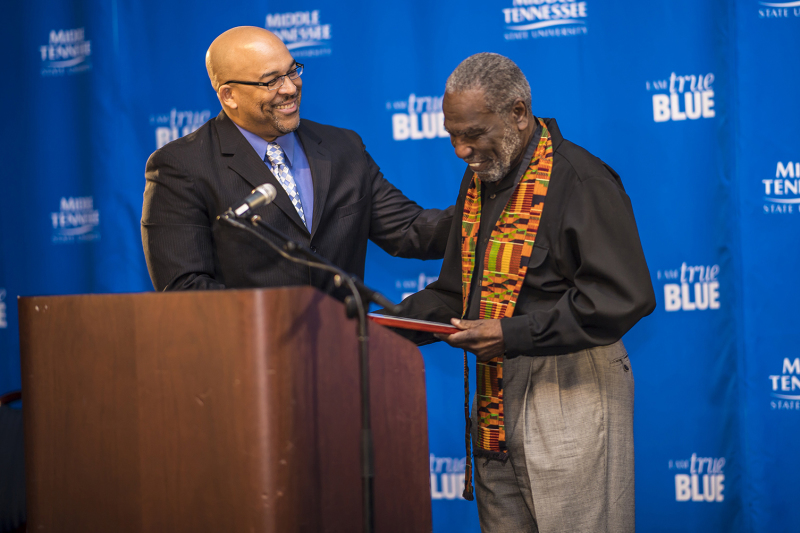 Associate history professor Louis Woods, recipient of MTSU's 2018 John Pleas Faculty Award, addresses the audience at the Feb. 22 ceremony honoring him in the James Union Building's Tennessee Room. Woods sports the African-styled scarf that Pleas gave him during the presentation.

The leader of MTSU's fledgling Africana Studies program is the recipient of its highest award for minority faculty.

Louis Woods, an associate professor of history, received the 2018 John Pleas Faculty Award at a Feb. 22 ceremony in the Tennessee Room of the James Union Building. Pleas, the retired professor for whom the award is named, made the presentation.

In accepting the honor, Woods focused on history, family and a sense of looking toward the future while maintaining a sense of purpose in the present.

"At some point, all of us will be ancestors, and I think we will be measured based on what we do today that will influence future generations," Woods said.

The new Africana Studies program, which officially began in August, now has 19 majors, and Woods said he was excited about its progress and its future.

He earned his bachelor's degree in Africana studies from the State University of New York at Stony Brook in 1999, graduating Phi Beta Kappa. He obtained his master's and doctoral degrees in African-American history in 2001 and 2006, respectively, from Howard University in Washington, D.C.

"I think we're blessed to have faculty members like you," McPhee said. "You're really the future, you and your colleagues, you are the future of the professorship and higher education."

Angelique Plasky, a senior from Memphis, Tennessee, with double majors in political science and Africana studies, said that she was always interested in black history, but she had only considered it an elective until she studied with Woods.

"Under your guidance and your mentorship, I have managed to find something that I'm genuinely passionate about and that I can see affecting my life, as well as the (lives) of others," Plasky said.

The John Pleas Faculty Award was established in 1997 to honor John Pleas, a professor emeritus of psychology and recipient of the 1999 Outstanding Teaching Award. It is presented annually to a minority faculty member who has demonstrated excellence in teaching, research and service.

Nominees must have completed at least five years of service at MTSU and have a record of outstanding service. Each nominee must have three letters to support his or her nomination.

Pleas stated that he was pleased with the selection of Woods both as the award recipient and as the leader of the Africana Studies program.

"This program is going to have an impact in five to seven years because it's needed, and this information that they're going to be disseminating and teaching over the coming years is going to make a change," Pleas said.

As is tradition, this year's ceremony was coordinated by the previous year's award recipient, social work professor Barbara Turnage, now interim associate dean of the College of Behavioral and Health Sciences.

For more information about the John Pleas Award, go to http://www.mtsu.edu/aahm/john-pleas-award.php.