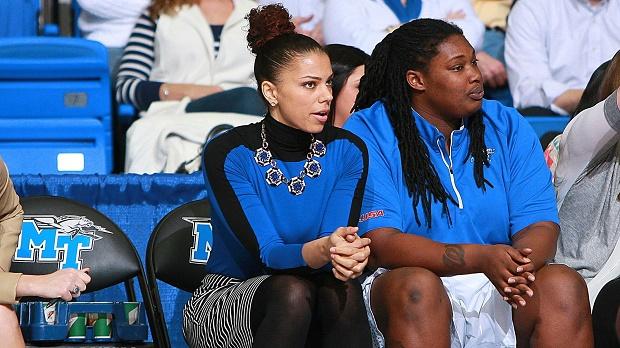 Middle Tennessee women's basketball head coach Rick Insell announced that assistant coach Alysha Clark will not return for the 2014-15 season. Clark, whose contract ends on April 22, will return to the WNBA's Seattle Storm.

"Alysha has been a valuable asset to our program as a student-athlete and most recently as a coach," said Insell. "She has made the decision to focus on her professional career. I have no doubts that she will return to coaching once her pro career is complete. I thank Alysha for her outstanding work this past season as our assistant coach.

"When Coach Insell hired me, we knew the crossroad of playing in the WNBA and coaching would have to be faced at some point," Clark said. "We just didn't think it would be this soon and we had no control over that. To be able to come back where I played and help make a difference in the program, as well as making a difference in the lives of the players is such a blessing. I am so grateful that Chris Massaro, Diane Turnham and Coach Insell gave me this opportunity. I absolutely loved being around my Blue Raider family and getting the chance to learn from such an amazing staff during my first year of coaching. I'll take everything I've learned this past season and apply it in my preparation for whatever God has in store for me next."

Clark helped the Blue Raiders to a 29-5 record, which saw MT collect a regular season and tournament title during the school's first year in Conference USA. As the posts coach, Clark helped All-America hopeful Ebony Rowe complete a remarkable senior year which saw her set 13 school records. Clark, a 2010 Middle Tennessee alum, was the nation's leading scorer for two years at MT.

"There are a lot of new rules that are taking effect in women's basketball this year," noted Insell. "Among those include the ability to have four coaches out recruiting and working with our student-athletes in the summer. It is important for us to bring in a coach that can help us with these new changes this summer."

The search to find Clark's replacement is underway and is expected to take place during the Women's Final Four later this week in Nashville.