Another Successful Middle Half

(L-R) Murfreesboro Mayor Shane McFarland talks to the 5,000+ at the Middle Hal, Murfreesboro Parks & Recreation Director Lanny Goodwin, and emcee of the event Tam Clark. Not only did he keep the excitement going, but he also said the prayer and sang our National Anthem to start the Middle Half.

The 5 wheelchair athletes begin when the pistol is fired at 6:55AM.

At 7:00AM the pistol is fired and 3,250 runners sprint forward to begin the Middle Half.

Volunteer Darlene Harris shows us what the Middle Half medal looks like. Each runner receives this.

You talk about a good neighbor, here's a man carrying an injured female across the finish line.

Friends enjoyed the run together, and the mist and cool temperatures made the half-marathon even more enjoyable.

World famous MTSU Coach Dean A. Hayes, whom the university's track and soccer stadium is named, was there helping as well.

Chalk-up another successful Middle Half for the Murfreesboro Parks and Recreation Department. What was described as a mist and temps in the upper 50s was all that was felt at the 8th Annual Middle Half. The race began in an eerie misty fog (see photo below). 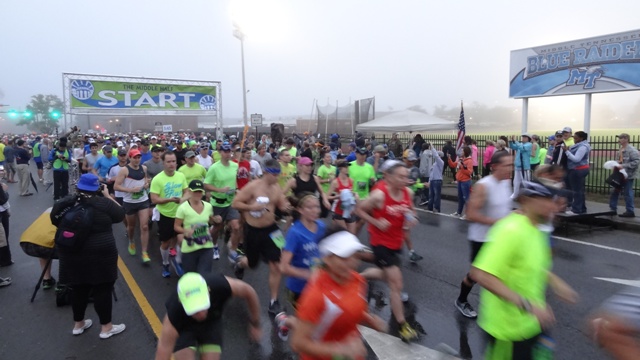 At 6:55 Saturday morning (10/11/2014) the pistol fired, five wheelchair athletes left the starting line on Greenland Drive. Then five-minutes later, the second shot signaled the half-marathon for 3,250 runners. Their flat 13.2 mile course took wound them through historic Murfreesboro and ended-up on the Middle Tennessee State University Campus at the Dean A. Hayes Track and Soccer Stadium. The flat terrain and cool temperatures attracted runners from this area as well as New York, Kansas, Missouri, Indiana, Georgia, Alabama and other states.

In the wheelchair race, Jose Pulido of Clarkesville, Georgia came in first. Jose did this in 52 minutes and 41-seconds. That broke the previous record set in 2012 by Matthew Porterfield. Chad Johnson Corydon, Indiana placed second with 57 minutes and 38 second. 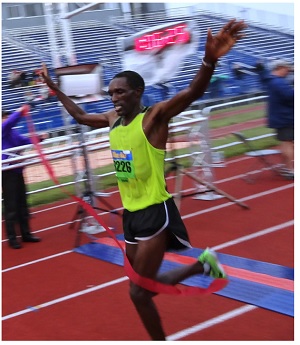 Congratulations also to well-known local runner Fred Lovelace, who was the top finisher in the 85-98 age group.

CLICK HERE for all of the Middle Half 2014 stats.