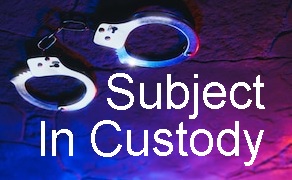 Murfreesboro Police have arrested 40-year old Antonio Starnes in connection with last Thursday's (5/3/2018) early morning shooting of Byrus Hughes on N. University Street. Hughes was found lying in the middle of the street around 5:00 o'clock that morning with multiple gunshot wounds. He remains in critical condition at Vanderbilt Medical Center.

It began in the noon hour on Tuesday (5/8/2018) when a detective who was driving an unmarked vehicle spotted Starnes driving on South Hancock Street with an unidentified passenger and attempted to initiate a traffic stop. The suspect began to flee. While attempting to turn onto East Main Street he crashed into another vehicle traveling away from downtown on East Main Street.

Starnes then lost control and hit a utility pole in front of Central Magnet School.

He was immediately secured at the crash scene by detectives. Upon initial medical assessment by Rutherford County Emergency Medical Services, Starnes was found to have a recent gunshot wound to his side and injuries from the crash. He was then rushed by RCEMS to Vanderbilt University Medical Center for treatment. The source of his gunshot wound, which occurred just prior to police contact, is still under investigation.

The injuries sustained by Antonio Starnes were found to be minor upon evaluation at Vanderbilt and he is being released to police custody to be booked into the Rutherford County Detention Center on charges of Attempted First Degree Murder and Evading Arrest. Additional charges are pending the outcome of the Tennessee Highway Patrol investigation of the crash.

The Tennessee Highway Patrol is investigating the incident, since Murfreesboro Police were involved.

For a short period of time on Tuesday, Central Magnet School was on "lockdown". However, that did not last long and normal activity resumed.

CLICK HERE for a link to the story about the SHOOTING Tuesday morning, May 3, 2018 on University Street.