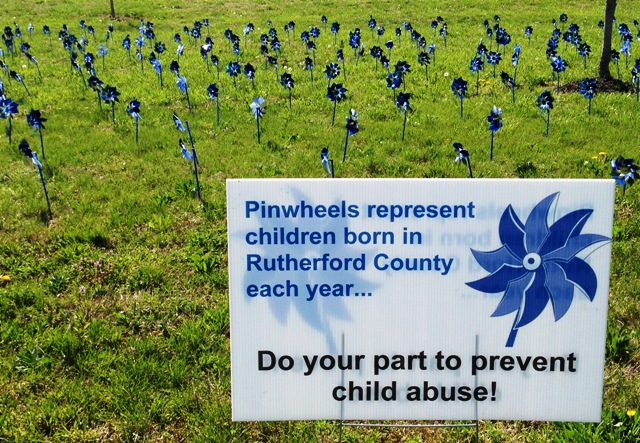 This month thousands of Tennessee businesses, citizens and community groups will be utilizing a classic childhood favorite - the pinwheel - to raise awareness about child abuse and prevention.

April is National Child Abuse Prevention Month, and according to the Tennessee Children's Advocacy Centers there were more than 7,500 confirmed cases of abuse in the state in 2012, the most recent year data is available.

"If we see someone in our community who is really struggling in their parenting, or who is having a difficult time, we can reach out to those people and offer our support," she says.

According to Rector, 50,000 pinwheels will be planted this month around the state.

The confirmed abuse cases by the Tennessee Department of Children's Services in 2012 involved more than 10,000 different Tennessee children. Drug exposure and sexual abuse were the most common sources of abuse.

If you suspect a child is being abused, experts recommend you remain calm, believe the child, allow them to talk and take action. Rector says it's important to remember that preventing child abuse is protecting a child from a lifetime of impact from their abuse.

"Building a brain is like building a foundation," says Rector. "If trauma and adversity happens while that brain is forming it can really have a long-term and lasting impact on that individual."

According to Safe Horizon, an organization that offers help to victims of abuse, 60 percent of reports of child abuse come from teachers, law enforcement and social services. Of the child abuse cases in 2012, a parent was the perpetrator in over 80 percent of the cases.

Tennessee residents can report suspected child abuse cases by calling the Department of Children's Services at 1-877-237-0004.