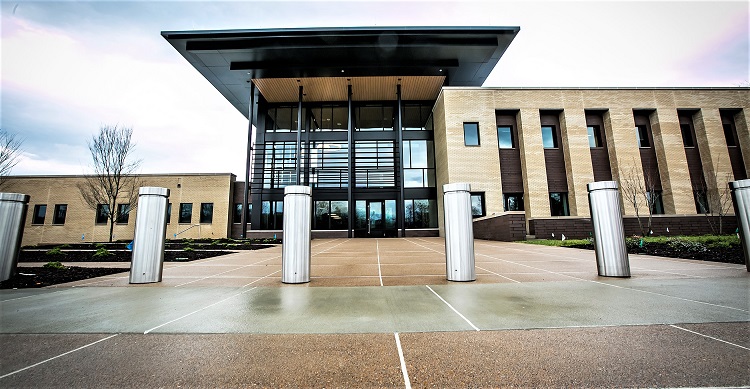 The public is invited to a special community viewing of the new Murfreesboro Police Headquarters, from 1 to 5PM this coming Sunday afternoon (4/29/2018). The massive 135,600 square foot complex is located at 1004 North Highland Avenue.

Mayor Shane McFarland said, "The city was able to revamp an existing structure that was vacant, and help to stop a community from fading after the hospital and several medical facilities moved to another part of town."

The City acquired the former Murfreesboro Medical Clinic (MMC) and acres located at 1004 Highland Avenue in December 2013 for $4.7 million.

The final building is 10,614 square feet larger than the original 125,000 square feet estimated in 2012. Including architecture and furnishings, the final Project Cost budget for the new Police Headquarters to date is $55.4 million.

In addition to these major features, the Police Headquarters building provides contemporary office and collaboration space along with technical work stations to meet the needs of a professional police workforce.

In February, the Murfreesboro City Council voted to approve a contract with CBRE Heery, including a Project Management Construction Audit, to reassure residents that public funds are being spent in a cost-effective manner. CBRE Heery (formerly Pinnacle) conducted a construction audit on the police headquarters project, including a contract review of the Guaranteed Maximum Prices (GMP), more than 100 change orders, and the architect's contract.

CBRE Heery found no contract violations and that all parties had performed consistent with their agreements with the City.

The new Police Headquarters replaces the 45-plus year-old main headquarters which has been located at 302 South Church Street since 1973. The criminal investigations division has been housed at 1734 South Rutherford Boulevard. In 1973, Murfreesboro's population was less than 30,000 and has grown to over 128,000 people. The facility is designed to meet future growth from 260 sworn officers today to over 400 personnel in the future.

In February 2014, the City hired a design team, led by the Kennon Calhoun Workshop (now the architect Workshop) that also included: