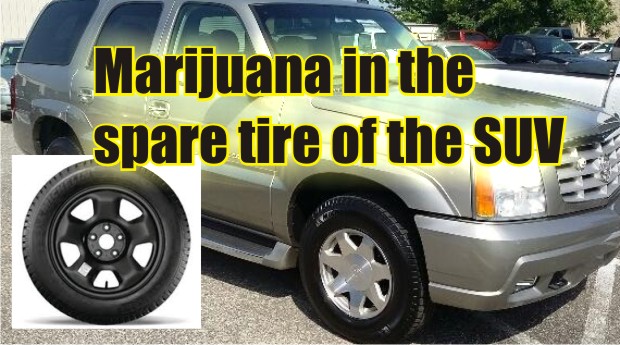 Seven vacuum sealed bags of marijuana were evidently hidden in the spare tire of a Cadillac in Murfreesboro. Police stumbled upon the tire when doing what is called a "Knock and Talk" at In Town Suites hotel. The phrase "knock and talk" is used when a police officer has the suspicion that illegal activity has taken place at the home or location in question.

When police arrived at the hotel they could smell marijuana coming from one of the rooms. A knock on the door of the room in question revealed a plastic baggie of marijuana and a paper bag of marijuana in plain view. Police then noticed the spare tire sitting along the wall of the room with tire tools next to it.

Police questioned Oscar Keith Johnson, Jr. who stated that he had plans of transporting 7 individual vacuum sealed bags of marijuana that were found near the tire to an address in New York. The 60-year old man actually lives in New York, according to the arrest report. Needless to say the tire and the marijuana were all seized as evidence and won't be making that journey to New York. Police also seized Johnsons Cadillac SUV and his cell phone as evidence.

The New Yorker who was in Murfreesboro for only a short time was charged with Felony Sale of a Schedule Six Drug. He will appear in a Rutherford County Courtroom on January 13, 2016.