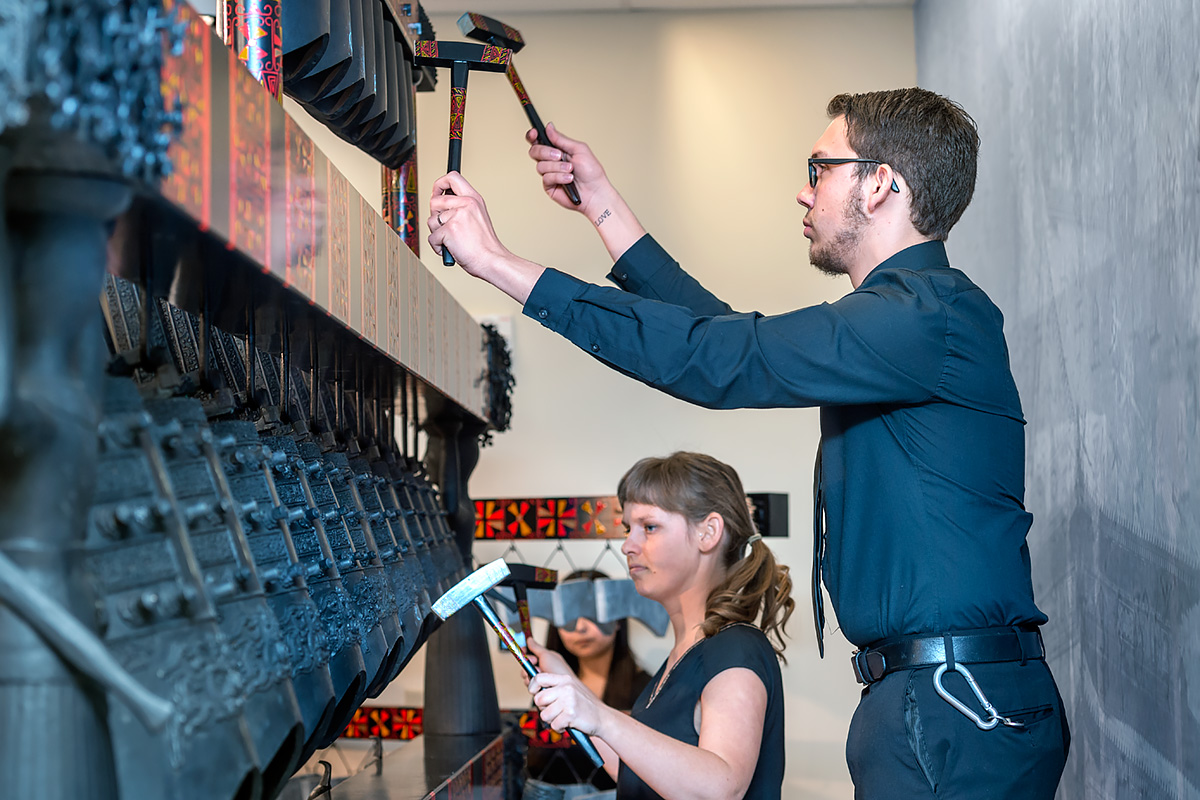 Students Shelby Shelton, left, and Jeff Upshaw play a bronze replica of ancient bells at the March 17 grand opening dedication ceremony for the MTSU Chinese Music and Cultural Center in the Miller Education Center on Bell Street. In the background, student Trianne Newbrey plays the qing, a set of limestone chimes. (MTSU photo by J. Intintoli)

With a performance of replica ancient bells, the first and only center of its kind in North America opened at Middle Tennessee State University Thursday (March 17).

The grand opening of the Center for Chinese Music and Culture was attended by a standing-room-only crowd of international dignitaries and university supporters on the first floor of the new Andrew Woodfin Miller Sr. Education Center at 503 Bell St.

Flanked by the flags of China and the United States, officials hailed the center's creation as a future hub for promoting not only music and culture, but also language, business and trade. Visitors to the 3,200-square-foot center will see a library, an archive, classrooms and a musical instrument gallery.

MTSU President Sidney A. McPhee, who has visited China every year since 1999, highlighted the educational component of the center as a stimulus for classroom learning.

Madam Hao Jingxi, vice president of Hangzhou Normal University, MTSU's sister institution in China, announced through a translator that a donation of 50 new folk instruments is on its way to the center.

"We will be able to provide graduate assistantships this coming year to two Chinese graduate students majoring in music in the School of Music," said Michael Parkinson, school director.

In fact, MTSU will have its own Chinese music ensemble next fall, the only one of its kind within 500 miles, Parkinson said.

Surrounded by numerous instruments made of wood, metal and gourd adorning the walls of the center, director Mei Han noted that chances to appreciate her own culture during her youth in China were limited, but expanded greatly during her time in the West.

"The experience of learning about different cultures and opportunities to interact with people from other cultures is very powerful," said Han, an ethnomusicologist specializing in Chinese music. "It nurtures minds, deepens human connections and sparks innovation. Life becomes richer and more meaningful."

State Sen. Bill Ketron read a letter from Tennessee Gov. Bill Haslam, who will travel to China with Commissioner of Economic Development Randy Boyd in May to promote business opportunities from the state's new development office there.

"Facilities like this can play a tremendous role in building bridges between different and diverse cultures, fostering greater understanding and spotlighting mutual opportunities for educational and economic growth," Haslam wrote.

Students from the School of Music concluded the ceremony by playing a set of bronze chime bells built as a replica of those discovered in the tomb of the Marquis Yi of the Chinese state of Zeng. The originals date back to 433 BCE (Before the Common Era).

Simultaneously, a student played the qing, a set of limestone chimes which always were played with the bells in ancient times, Han said.

"It's a balance the yin and the yang, between masculinity and femininity," Han added.

More than a repository for indigenous instruments, the center will collaborate with programs offered at MTSU, including those offered by the School of Music, College of Liberal Arts and College of Media and Entertainment, among others.

The university's Academic Affairs division will be responsible for all educational functions of the center, including the director's work and the creation of ensembles and courses in Chinese music.

The center was made possible with an initial $1 million grant from Hanban Confucius Institute in Beijing, an organization sponsored by China's education ministry that oversees more than 440 institutes in 120 countries.

MTSU's own Confucius Institute, located in Peck Hall, strives to enhance understanding of Chinese language and culture, provides outreach to create collaboration between Tennessee communities and China and serves as a resource center for Chinese language, history and culture.

Regular visiting hours will be established in the fall 2016 semester. To make an appointment, or for more information, contact Han at 615-898-5718 or mei.han@mtsu.edu. To learn more about the Center for Chinese Music and Culture, go to http://mtsu.edu/chinesemusic/.