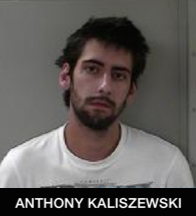 A 22-year old Benley Street man, wanted on various charges, including aggravated robbery, has been apprehended by Murfreesboro Police. Officer Cody Nolin reports making consensual contact last Thursday with Anthony James Kaliszewski. The officer asked the suspect to step out of his vehicle and talk and according to the report, was visibly shaking, kept looking away as if he was looking for something and had an odor of intoxicant about him. A warrants check revealed Kaliszewski was wanted for charges of aggravated robbery, theft of property between five-hundred and one-thousand dollars and violation of parole for assault and possession charges. Kaliszewski was jailed on 21-thousand dollars bond.