Big Changes for MTSU Tailgating this Saturday and This Season 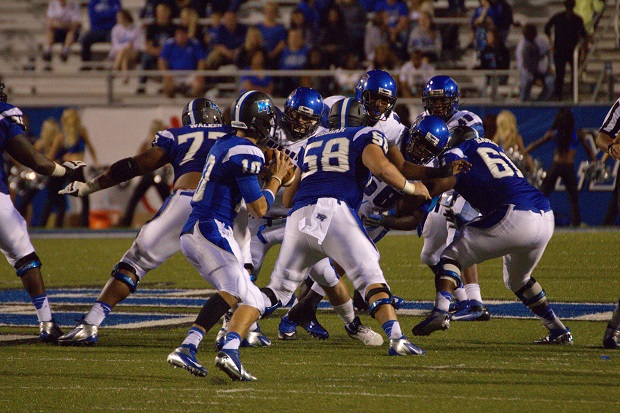 With a new season set to get underway Saturday against Alabama A&M, patrons and fans to Middle Tennessee football games can expect some noticeable changes to game day operations, including bag checks at the gate and relocation of some tailgating areas.

Perhaps the biggest change patrons will see this season is before they even get to the game.

Construction on Middle Tennessee Boulevard to the west of campus has closed some of the routes fans may have taken to games in the past.

"[The construction] will slow down the flow of traffic in and out of campus," said Kortne Gosha, MT associate athletic director of operations. "I'm telling anyone I come in contact with to avoid Middle Tennessee Boulevard from the corner of Greenland to Main. It is going to be extremely slow and extremely congested."

The Middle Tennessee Boulevard construction has also created a slight change in parking. In the Greenland Drive parking lot to the north of campus, patrons can park there for $10 per game. BRAA members with the Greenland or RV passes will also be able to park there.

"Due to the Middle Tennessee Boulevard construction, people are going to gravitate to get as close to the stadium as they can, so the Greenland lot may fill up a little bit quicker," Gosha said. "For our patrons, it's just a good note to leave five or 10 minutes early coming to the game and enjoy some of the pregame festivities."

Changes to some tailgating areas

For fans that are looking forward to tailgating this season, there is a change there, as well.

In the past, patrons were able to tailgate in the cove between the Tom Jackson and James Union buildings and Middle Tennessee Boulevard. However, this season that area is not available for tailgating. Patrons can instead head to the lawn at the Wood-Stegall building along Alumni Drive or to the grass area next to the Greenland Drive parking lot and Middle Tennessee tennis courts. All of these areas are free and on a first-come, first-served basis.

The Greenland tailgating area will be split into 50 "30-by-30-foot" plots. Patrons can use them on a first-come, first-served basis and can pull their vehicles right into the space and pop up a tent if they so wish.

"That will be new for a lot of the people who are tailgating in that area, but they will see our lined plots out there," Gosha said. "We think the Greenland grass tailgating area will be a vibrant area for patrons this year."

Bag checks at the gate; no weapons allowed

Once fans get to the gates to get into the game, they will see another change. For the first time this season there will be bag checks at every entrance to Floyd Stadium. This will be standard bag check and not a clear bag policy.

All bags 14-by-14-by-10 inches and smaller will be allowed into the stadium, and every bag will be checked before patrons are allowed to enter. There will also be separate lines for those without bags.

"Security and safety is our no. 1 priority," Gosha said. "We have collaborated with Murfreesboro Police, University Police, the Tennessee Highway Patrol, the Rutherford County Sheriff's Office, Homeland Security and a division of the FBI to talk about game-day security and some of the logistics in getting people in and out.

"We do know the first time or two will be different for our fans, but we hope and anticipate it will not slow down our lines for getting people in."

There will be A-frame signs placed throughout the tailgating areas and stadium entrances telling patrons what they can and can't bring into the stadium.

While a bill was signed by Gov. Bill Haslam earlier this year allowing guns on college campuses in Tennessee, they will not be allowed in any of Middle Tennessee's athletics facilities.

"There are no weapons of any kind, carrying permit or not, within any athletic venue on campus," Gosha said. "Part of that is to make sure all of our fans are secure and safe at every opportunity when they come on campus."

Another tweak to game day involves Raider Town. For the 2016 season, Raider Town will open at 4 p.m. and will be located near Floyd Stadium in the Gate 3 area, which is easy access to the stadium so fans can enjoy all the pre-game festivities. Raider Town is free to the public and will feature different vendors, food trucks, give-a-ways, inflatables, and music.

With all of the changes to game-day operations for Blue Raider football games, patrons are asked to be patient with traffic and encouraged to have a fun and safe game-day experience. For any questions or concerns, please contact the Middle Tennessee Ticket Office at 615-898-5261.

For reasons of safety, the following items are NOT PERMITTED in Floyd Stadium: