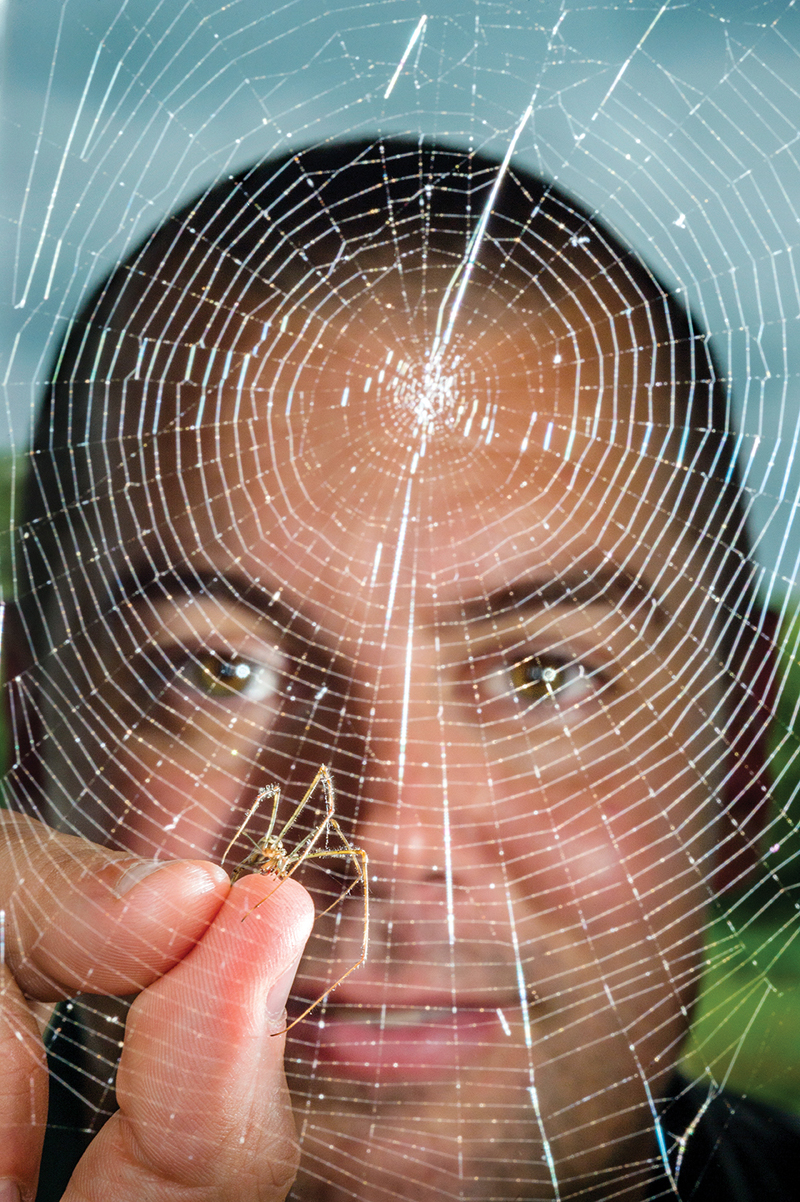 Ryan Otter, an associate professor of biology at MTSU, used long-jawed orb weaver spiders to measure and gauge the contamination of the 2009 fly ash spill near Kingston by measuring the toxins absorbed in the fat levels within hundreds of insects he collected at the site. (MTSU photo)

Ryan Otter's work as a teacher, researcher and advocate for student success has led to special recognition by MTSU President Sidney A. McPhee, the university announced Wednesday.

Otter, an associate professor of biology, is the eighth recipient of the President's Silver Column Award, which McPhee established in 2004. McPhee, along with Dean Bud Fischer of the College of Basic and Applied Sciences, recently surprised Otter at his office in the Science Building with the news.

McPhee said the award "recognizes excellence at the highest level" and cited Otter for his "passion for what you do, not only as a teacher, but as a researcher (who) is really making a difference in your field and for this university."

Otter, an environmental toxicologist, was part of a multiagency response team that assessed the impact of the 2009 ash spill near TVA's Kingston Fossil Plant, described as one of the state's worst environmental disasters.

Dubbed "MTSU's Spiderman," Otter used long-jawed orb weaver spiders to measure and gauge the contamination of the Kingston spill by measuring the toxins absorbed in the fat levels within hundreds of insects he collected at the site.

"I've been given the freedom to do what I wanted to do," Otter said. "The lifestyle I can live here, both professionally and personally, allow me to pursue my passion without having the hurdles in the way."

McPhee also cited Otter's work as part of the management team for the university's Quest for Student Success, a series of reforms launched by MTSU to increase retention and graduation through changes such as academic course redesigns, enhanced advising, and new student data-tracking software.

Through that work, the president said, he observed Otter's "true commitment to students, your high expectations for students, that passion and desire to see students (be) successful."

Born in suburban Detroit, Otter enrolled at Michigan State University, where he struggled the first couple of years with what he wanted to do for the rest of his life until the fear of graduation and life after college sank in.

After talking with professors and using existing tools to help students facing similar issues, he developed a method to pick the right career path. The method, which he called "The College Game Project," helped him hone in on science as a career. He later wrote a book on the method for prospective students.

Otter graduated from Michigan State with his bachelor's and master's degrees in zoology and his Ph.D. in environmental toxicology from Clemson University. After an 18-month postdoctoral research fellowship at Miami University, he accepted a research and teaching position at MTSU in 2007.

Otter, who lives in Murfreesboro with his wife, Liz, and their two sons, enjoys the convenience of having a home just a mile and a half away from campus.

"We chose to stay here; my wife and I chose to raise our family here ... so we're (on campus) more often," he said in thanking McPhee. "My kids are here everyday. It's the environment that we love."