Blackman Edges Oakland 28-21 at the Inferno

Fans pack the stadium an hour before the 11am kickoff Sunday.

It was the hottest ticket in high school football in the mid-state...Oakland at Blackman. The game and the temperature lived up the to hype. It was Blackman's third quarter score by running back Charlie Davidson that gave the Blaze a 28-21 win over the Patriots...

Bryan Barrett with the call on WGNS of the touchdown that put Blackman up 28-21.

Oakland scored first on their opening drive on a 5-yard run by Tyler Black. Just a little over four-minutes later, Blackman answered with a five-yard touchdown pass from Jauan Jennings to Quen Hardy. The second quarter saw a lot of action with Black scoring again to give Oakland a touchdown lead at 10:16 left. But again, Blackman scores around four-minutes later on a 6-yard Jennings run. They missed the extra point and Oakland still led 14-13.

With 3:34 left in the first half, Oakland quarterback Christian Haffner finds wide receiver George Gbeese (BEE-see) on a 40-yard pass for a 21-13 lead. The Blaze again battle back and a minute later, score on a 17-yard run by Jennings and an Oakland penalty after the score allowed them to go for two to tie the game at 21.

Blackman defensive lineman Sam Luker was hurt in the second half and was taken off the field by paramedics and taken for evaluation. It was said to be a hyperextended back.

The Patriot's leading rusher was Josh Cunningham, who had 51 yards in the first half and just two in the second half for 53 yards. Haffner was 9-of-12 for 157 yards and two interceptions and rushed for 24 yards. Gbeese had 93-yards on two catches and was the leading receiver. Oakland had 92 yards rushing, 157 passing for 249 yards in total offense.

Davidson rushed for 143 yards on 16 carries. Jennings was 4-of-7 passing for 92 yards and rushed for 57 on 15-carries. Ronnie Killings was the Blaze leading receiver with 62-yards on two catches. Blackman had 214 yards rushing, 98 passing for 322 yards of total offense. Blackman won the turnover battle as the Patriots threw two interceptions and lost one fumble.

It's a short week of preparation for their next game. Blackman (1-0) will host Brentwood Friday night. Oakland (0-1) will host White Station. 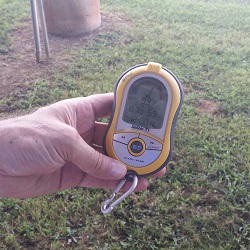 HEAT
Aside from the great game, the heat played a factor for the players and fans. Most people in the stands did whatever they could to stay cool, whether it was ice water or hand fans. Players on the field tried to keep cool with sideline fans and IV fluids during halftime. Blackman administration had a psychrometer (SI-crom-eh-tur) keeping watch over the temperature and humidity, known as heat index. By TSSAA and county school policy, if the heat index reachs over 104-degrees, all outdoor activities have to be suspended until it falls below that temperature. While the heat index did go over 104-degrees after the game around 2:30pm, it didn't affect the game.