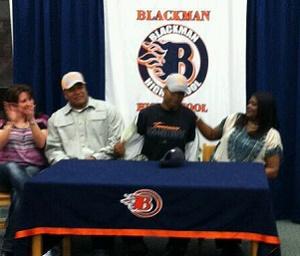 Blackman standout Jauan Jennings has committed to play football at the University of Tennessee. He chose Knoxville over Alabama, Auburn, Mississippi State, Ohio State and Northwestern during a press conference at Blackman High School Monday. The four-star prospect hopes to play quarterback. Jennings was the junior quarterback for the Blaze, leading them to the school's first ever semifinals. He also plays basketball and helped to lead his team to the school's first ever boys state championship, the first for Rutherford County in 49 years.