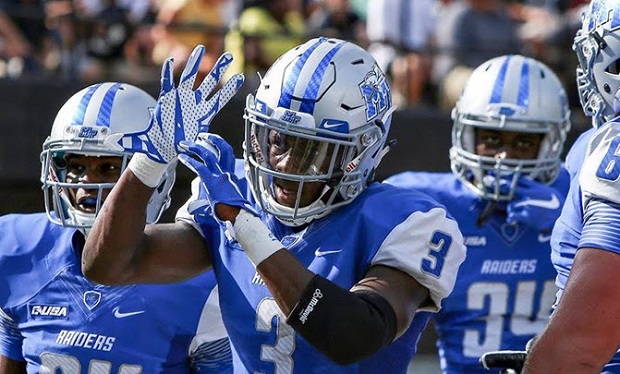 In the second consecutive year of a Murfreesboro-Nashville matchup, the Middle Tennessee Blue Raiders just didn't have enough to get a win against Vanderbilt on Saturday.

The Blue Raiders tried to overcome early miscues and a rain delay, but Vandy proved to be too much behind junior running back Ralph Webb. The final came to 47-24 in favor of the Commodores.

"Frustrating, disappointing loss," MT head coach Rick Stockstill said. "I'm disappointed in how we played in some areas ... I don't know if they stopped us in the first half, we just stopped ourselves. We did some good things, but we just weren't consistent enough. We have to play smarter than how we played."

The loss broke Middle Tennessee's three-game winning streak at Vanderbilt dating back to the 2001, 2002 and 2005 seasons.

MT had issues taking care of the ball early in the first half, turning it over twice and giving up a safety on a muffed punt that led to 10 quick Vandy points.

Despite the miscues, the Blue Raiders moved the ball very effectively most of the game against the Vanderbilt defense. Middle Tennessee outgained the Commodores 495 to 344 in total yards.

"They're a really good defense," Blue Raider redshirt senior I'Tavius Mathers said. "I thought we moved the ball well, though ... we just had some stuff that just can't happen."

Redshirt sophomore quarterback Brent Stockstill led the charge offensively for Middle Tennessee. He followed up a big season-opening performance against Alabama A&M by throwing for 399 yards (a new career high) and three touchdowns. He completed 38 passes on 65 attempts (both MT school records) and threw one interception.

"We just wanted to win, that was our only expectation," he said. "In a game like this with such a good defense - their front seven is so good and make it tough to run the ball - I guess it's kind of on my shoulders to get it done through the air. I thought we moved it OK, we just have to finish."

Defensively, the Blue Raiders looked up to the task of stopping Vanderbilt's offense through much of the first half. Prior to an hour and 44 minute lightning delay with 5:44 left in the second quarter, the Commodores had gained just 59 yards of total offense.

After the delay, though, Vandy ripped off 285 yards over the rest of the game. The Commodores scored twice in in the last five minutes of the first half to turn a two-point lead into a 33-17 halftime score.

"I thought our defense played really good that first part until the rain delay," Rick Stockstill said. "We were ready, we had a good plan inside what we were doing during the delay. [The delay] isn't an excuse, we just didn't play well enough defensively those five minutes or six minutes after the rain."

Redshirt sophomore Darius Harris, who was making his second start for the Blue Raiders, led the way on defense with 12 total tackles, .5 sacks and 1.5 tackles for loss. He also forced a fumble, which he recovered.

"Until you watch the film it's hard to say, but it looked like he played fast and tackled well," Rick Stockstill said. "I thought he played hard."

Webb was the main driver for Vanderbilt's offensive attack, rushing for a career-high 211 yards on 29 carries with two scores.

Middle Tennessee now sits at 1-1 on the season with a road trip to Bowling Green (1-1) upcoming in Week 3.

James said the Blue Raiders have to forget about the loss and come back Sunday with a focus on the Falcons.

"We played hard, we just didn't execute very well," he said. "That's what Sunday practices are for - after a loss you just shake it off and come back tomorrow and work."