Blue Raider Men Punch Their Ticket to the Dance 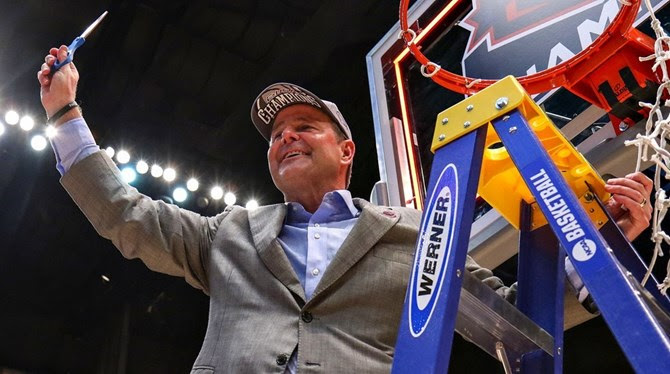 The Middle Tennessee men's basketball team is headed to the big dance after a 55-53 win against Old Dominion to capture the 2016 Conference USA Championship...

Chip Walters with the call on the Blue Raider Network, heard here on NewsRadio WGNS.

"This is a great feeling for our players, for our assistant coaches and especially for our fans," head coach Kermit Davis said.

"We've won a lot of games in the last four or five years and won some regular season championships, but to win a tournament and for our players to get to really enjoy going to the NCAA Tournament, we're really happy for everyone and it is going to be a great week for Middle Tennessee State University."

Perrin Buford joined Upshaw on the All-Tournament Team, scoring 16.3 points per game and pulling down 6.0 boards per game.

The game got off to a slow-paced start as the Blue Raiders and Monarchs were tied at six going into the first media timeout.

As the game clock approached the 11:00 mark, Jaqawn Raymond drained a triple to put Middle Tennessee out in front 13-10.

After ODU ran off four consecutive points, Potts put the Raiders back on top with his second long-range jumper of the contest.

The game maintained a slow pace as the half neared its end with Old Dominion taking a six-point advantage with just under a minute to go.

Middle Tennessee got one point back on a free throw by Raymond, but went into the locker room trailing 28-23, converting just 33.3 percent of its field goal attempts in the first half.

Perrin Buford opened the second half with an old-fashioned three-point play but the Monarchs quickly opened up a seven-point lead on the Blue Raiders.

Potts nailed his third trey of the game at the 14:28 mark to pull the Blue Raiders back within one and liven up the large Middle Tennessee crowd in attendance.

Old Dominion held a three-point advantage with 12 minutes on the game clock until Middle reeled off a quick 7-0 run capped by Potts' fourth three-pointer to go up 43-39.

The Raiders then opened up a 46-41 lead but the Monarchs answered with an 8-0 run as the lead changed hands once again.

Darnell Harris tied the game at 49 with four minutes to go, but the Blue Raiders suffered a blow on their next possession as Giddy Potts was called for his fifth foul on a charge that drew loud booing from the MT faithful.

After swapping a couple more baskets, Middle Tennessee got a key stop to give them a chance to win it on the final possession of the game.

Upshaw drove to the basket as the clock was winding down, spun and drew a foul with 2.9 seconds remaining. Upshaw sank both of his free throws to put the Blue Raiders up 55-53.

Old Dominion ran an inbounds play from the far baseline but couldn't get a shot to go, sealing the win and the conference championship for Middle Tennessee.

The Blue Raiders will now sit and wait for their name to be called on Selection Sunday ahead of their second NCAA Tournament appearance in the last four years.