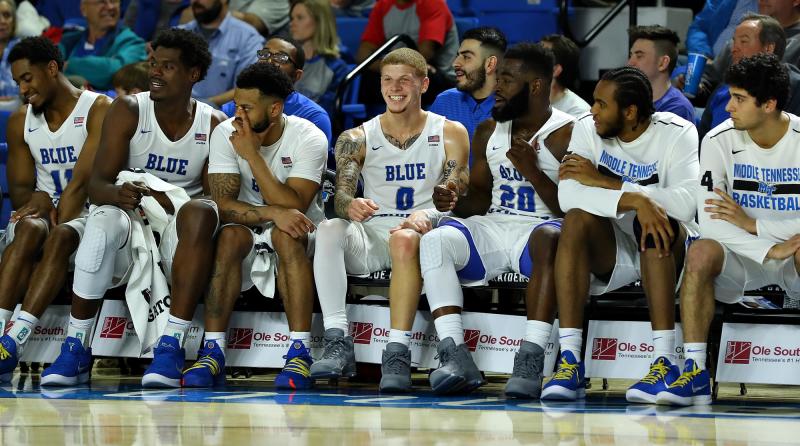 When Middle Tennessee takes the court Saturday at home against UAB, it will do so with the program's first Associated Press Top 25 ranking.

The Blue Raiders (22-5, 14-1), who currently sit atop the Conference USA standings with three regular-season games left to play, were ranked 24th with 87 total votes in the latest poll released Monday.

"You feel so happy for your players with the hard work they've put in," head coach Kermit Davis said. "You also feel great for your fan base and your MT brand, especially when you get ranked this late in the year based on the long haul and what we've done.

"It's just a really good day for Middle Tennessee basketball."

Middle Tennessee has rattled off nine straight wins, its most recent coming Saturday in 87-70 fashion at LA Tech. The victory was its 12th on the road this season, marking a new school record, and was also the 400th Division I win of Davis' career.

Its 22 wins have also come against a tough slate. MT currently sports the nation's seventh-toughest non-conference strength of schedule.

Defense has been the Blue Raiders' calling card this season. They're second in the conference and 31st nationally giving up just 65.7 points per game, and in 15 C-USA contests they've lowered that number to 62.5 per game to lead the league.

Redshirt senior Nick King, playing in his only season for MT, has led the way offensively. The Memphis native is averaging 21.4 points (third in C-USA, 22ndnationally) and 8.4 rebounds (fifth in C-USA) per game and was named one of 10 players nationally as a Karl Malone Award candidate, given annually to the country's best power forward.

The ranking doesn't come completely as a result of this year's strong season, though. It's something Davis and the Blue Raiders have been working towards the past few years.

Middle Tennessee has won or shared five regular-season league titles in the last eight seasons leading up to 2017-18 with a 91-31 conference record over that time. The Raiders are also 31-2 in their last 33 C-USA games going back to last season and in 2017 became the first team in NCAA Tournament history to win games over Power 5 conference programs in back-to-back seasons as a 12 seed or lower.

"It's a tremendous historical benchmark for our basketball program," MT Director of Athletics Chris Massaro said. "The efforts of many players and coaches have built that, obviously led by Kermit, and it just means a lot in terms of publicity and recognition that we are a top-25 program. To have that validated from the outside is really meaningful to us."

The first-ever AP Poll ranking doesn't mean Middle Tennessee will sit and congratulate itself on a good year. There are still three games to play in the regular season plus the Conference USA Tournament for the Blue Raiders to prove themselves even more before the NCAA Tournament.

"I think our team has been great at that all year," Davis said. "I think we're focused on trying to get to this one point, and they understand how big this game is versus UAB on Saturday. Our team is with the elite of college basketball and our national brand is one step closer to where we want it to be, but we all understand we have a lot of work ahead of us."