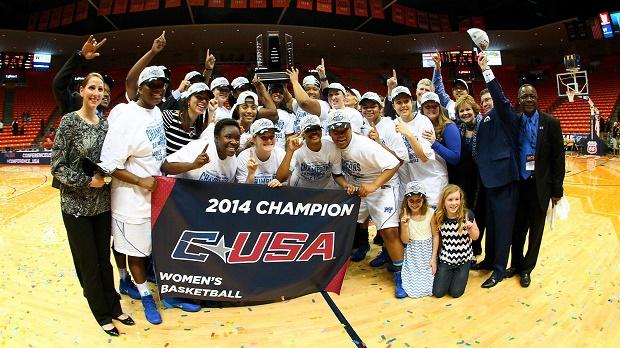 2014 Conference USA Player of the Year Ebony Rowe poured in 23 points and the Raiders forced 20 turnovers to slow down the high-powered attack of second-seed Southern Miss. MT advances to the big dance for the 10th time out of the last 11 years.

Rowe was named the 2014 Tournament MVP for helping the Blue Raiders (29-4) receive the league's automatic bid to the NCAA Tournament. The 29 victories are the second most in program history, just one shy of the 2006-07 squad. The Lady Eagles (26-6), who had their 13-game winning streak snapped, will learn their postseason fate on Selection Monday.

While both teams shot well (USM 23-55, 41.8% and MT 29-58, 50.8%), the Blue Raiders separated themselves through their pressure defense and by crashing the offensives boards. Middle Tennessee enjoyed a 25-10 advantage in points off turnovers, while using 17 offensive boards to out-score the Lady Eagles, 19-9, in second-chance points.

Southern Miss scored the first five points of the contest to grab the early lead before Middle Tennessee struck back in the form of a 15-7 surge. Rowe capped it with a triple to give the Blue Raiders a 15-12 advantage with 10:32 to play in the period.

The Lady Eagles regrouped and scored eight of the game's next 10 points to stake a 20-17 advantage with 5:35 to play in the period. Middle Tennessee didn't flinch, though, relying on its vaunted defense to take control of the game heading into halftime.

USM scored just two points- a jumper by Faulkner-while being forced into five turnovers in the sequence, helping fuel a 13-2 run by the top seed to secure a 30-22 advantage at the break.

It was back-and-forth action over the first several minutes of the second stanza, and the difference was just 10 (41-31) with 15:30 to play in the game after a Tamara Jones triple. Similar to the first half, though, Middle Tennessee found another gear, with a 16-2 surge that spanned seven minutes putting the Lady Eagles in a hole too deep even for their high-octane offense to overcome.

The margin swelled to as many as 31 at one point, in part due to USM fouling down the stretch.

After securing their 17th NCAA berth, Middle Tennessee will host a selection show event open to the public on Monday, March 17 at the Jeff Hendrix Stadium Club. The show is set to start at 6 p.m. CT. Full details will be released on Sunday.

Middle Tennessee's 29th victory is the second most in program history. The school record is 30 held by the 2006-07 squad ... The Blue Raiders won their 14th conference tournament title and the fifth in nine seasons under Rick Insell ... MT will make its 17th NCAA Tournament appearance and the eighth under Insell. MT has made a school-record six consecutive NCAA Tournament appearances ... China Dow tied a career-high with 11 points.