Bomb Threat FALSE at nearby medical office in DeKalb County 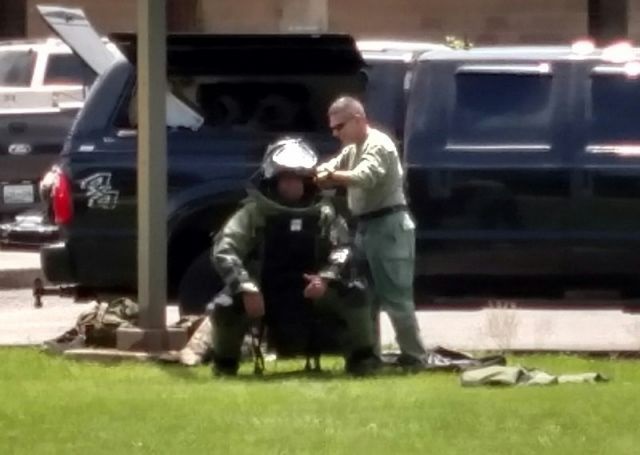 A suspicious package found in front of the Medical Specialty Office building near DeKalb Community Hospital Wednesday morning turned out to be a brief case containing personal belongings of the owner. But when it was found, the building was evacuated and the hospital perimeter placed on lockdown for several hours as a precaution until the briefcase could be examined.

The following is a media release to News Partner WJLE issued by the hospital:

"At approximately 11:15 AM today a suspicious package was reported in front of the doctors building on the DeKalb Community Hospital campus in Smithville, TN. A code orange bomb threat was then issued for the entire hospital facility and a perimeter lockdown immediately took effect. Incident commander Brandon Donnell was quoted as saying, "We had a quick response from the police, fire department, sheriffs department, State Bomb and Arson, bomb dogs from Lebanon, local TMA, THP, EMS, TEMA, 9-1-1, as well as the hospital staff and administration who train and prepare often for this type of crisis."

The DeKalb Community Hospital campus maintained the perimeter on lockdown until all communicating parties deemed the threat was no longer an issue. At approximately 2:00pm, the code orange bomb threat was changed to an all clear.

The Lebanon EMS was on the scene with additional support. "From our viewpoint, when we came on the scene, the evacuation procedure was spot on for a code orange (bomb threat), "said a representative for Lebanon Emergency Services Unit, "I was impressed to see your (DeKalb) emergency, fire, police, and all involved were all working so well together and were on the same page. That's always a great sign. I was very impressed."

Smithville Fire Chief Charlie Parker agreed, "I appreciate everyone working together to do a great job," said Parker, "We were relieved that the threat was not real, but it is good (for the future) to see how efficiently everyone responded."

"It is our priority to ensure the safety of our patients and we take every precaution necessary to that end," said Hospital CEO Sue Conley, "Our staff is well-trained and reacted quickly to this potential threat, and I am further impressed by the response of our emergency community."