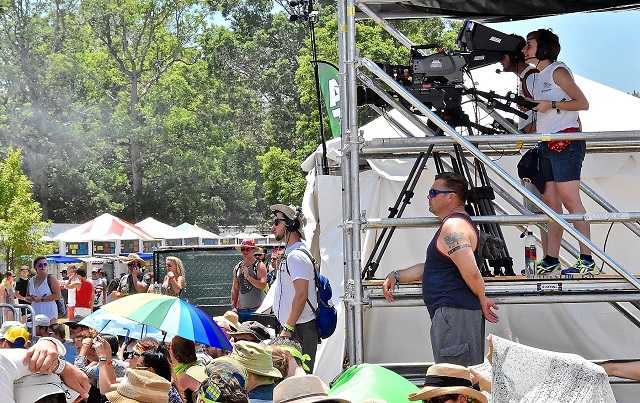 As year four of MTSU's partnership with the Bonnaroo Music and Arts Festival closed Sunday, here's what it meant for the students at the event, by the numbers:

And more than two terabytes of recorded media, including raw, high-definition video and multi-track audio, that will become the core of laboratory work for students in MTSU's College of Media and Entertainment back in the classrooms.

"Every year, this partnership becomes more valuable for our students and this legendary festival," said MTSU President Sidney A. McPhee. "Our relationship with Bonnaroo provides our students with the kind of real-world experience you can't find elsewhere."

The 50-person crew of students, faculty and staff only averaged about five hours of sleep during the four-day event, working in shifts to capture acts and events that went into the wee hours of the morning.

"The volume of our student work is impressive, but numbers don't tell the whole story," said Media and Entertainment Dean Ken Paulson.

"There's also the immeasurable confidence-building that goes on, plus all the high-fives as they walk through the crowd with their MTSU gear on."

Associate professor Leon Alligood from MTSU's School of Journalism, who helped direct the reporting team, said, "Each year, Bonnaroo offers our students an opportunity to immerse themselves in a big-time entertainment event.

"They also leave the farm with a desire for more. As an educational experience, Bonnaroo can't be beat."

Michael Fleming, a Recording Industry professor who teaches audio production, said covering a live event, as opposed to a simulated experience, helps students learn how to deal with the unexpected. For example, he said, students had to deal with a technical glitch in real time during one show - and keep working without a hitch.

"The grind of several days of production is a lot different than one-off events," Fleming said. "You learn to deal with unexpected events and how to spring to the task of troubleshooting."

But it's all about the experience, plus the actual college credit, the students received at Bonnaroo, said Robert Gordon, a Media Arts assistant professor who oversees MTSU's Mobile Production Lab stationed at the festival.

"These four days of live concerts gave students a realistic, hands-on experience about what the live video concert industry is," Gordon said. "This event gives them a great resume builder for a very competitive, freelance-heavy field."