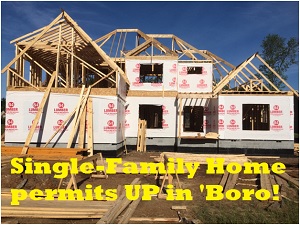 Single-family residential detached permits continue their upward trend in Murfreesboro for 2016. This is on top of the significant growth seen last year. At the mid-way point (Jan.-June 2016), the number of single-family detached permits issued (529) was 102 units above the 427 units permitted in the first six months of June 2015. In addition, 207 single-family residential attached units were permitted through the first six months of 2016, compared to 159 in the same period in 2015.

This single-family growth reflects a healthy Murfreesboro economy and continued growth in housing in one of the fast-growing cities in the U.S.

A recent national survey of home builder sentiment remained positive in June rising two points to 60. A sentiment above 50 is considered positive. The National Association of Home Builders (NAHB) survey indicated that builder confidence in the South rose 2 points to 61. Nationally, new home sales declined 6.0 percent in June to a seasonally adjusted annual rate of 551,000 units, still the highest since February 2008. New home sales are up 8.7 percent from a year ago. Meantime, home prices rose 5.4 percent in April, the most recent month reported by S&P/Case-Shiller 20-City Composite Index. A tight supply of homes for sale has pushed home values higher and continues to make affordability an issue, especially for first-time homebuyers.

*In 2006, at the height of Murfreesboro's construction boom, lots available peaked at 1,799.