Butch Jones Out at Tennessee 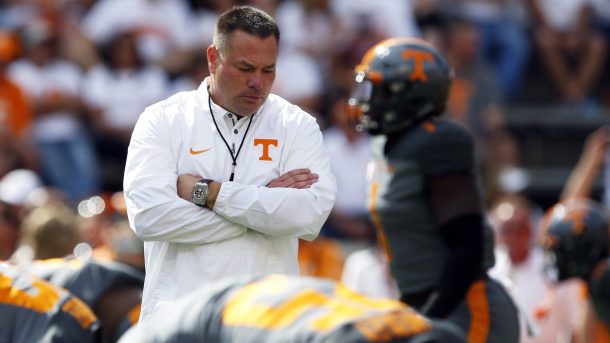 Butch Jones has been fired as head coach of the Tennessee Vols. Photo from NBC Sports Radio.

After initial reports on Sunday broke the news of the latest coaching change in college football, Tennessee Athletics Director John Currie has now confirmed it through a statement. Butch Jones is out as the head coach of the Vols, and Brady Hoke is officially the interim coach for the remainder of the season

"I would like to emphasize how much I appreciate Butch and Barb Jones and their sons, Alex, Adam and Andrew," the statement form Currie reads. "The Jones family has poured their heart and soul into this Tennessee football program and the Knoxville community. We have been fortunate to have Coach Jones lead our program for the last five years. During that time, the program has improved tremendously in the areas of academics, discipline and community involvement."

"Unfortunately, we are not where we need to be competitively. For that reason, I have asked Coach Jones to step down as head football coach. I know Coach Jones will be successful moving forward, and we wish him all the best in his future endeavors."

Some reports suggested Jones was given the option of coaching out the remainder of the season, only to have Jones turn down the offer. If that offer was extended, it was probably the best call Jones could make given the circumstances.

Tennessee was 34-27 in five seasons under Jones and 3-0 in bowl games, but the program was clearly in need of new direction as Jones' tactics were not having the kind of impact and success Tennessee had hoped to see by now.

Hoke last acted as a head coach during 2014 in his final season with the Michigan Wolverines. Hoke has a career coaching record of 78-70 between three jobs with Ball State, San Diego State and Michigan.