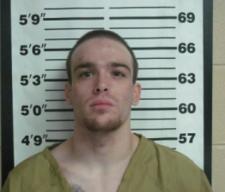 A 23 year old Cannon County father was arrested after his 11-month-old baby was rushed to the hospital over the weekend with head trauma. Investigators say Mark McClain Jr. was arrested in connection to the injuries.

The baby, now in the intensive care unit at Vanderbilt Medical Center, suffered broken bones and brain swelling. McClain is under investigation by the Department of Children's Services.

According to Cannon County Sheriff Darrell Young, the case has been turned over to the District Attorney's office.