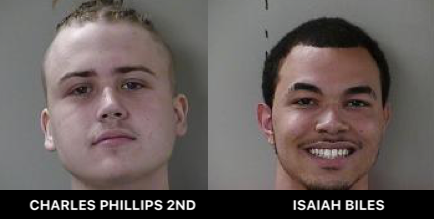 Two suspects in the theft of the vehicle of a Jimmy John's driver led Murfreesboro Police on a foot chase before being apprehended. Officer Joshua Borel reports he was dispatched to an auto theft call at College Grove Apartments on Lascassas Pike around 12:30 Saturday afternoon. That's when he reportedly saw a vehicle fitting the description of the one stolen. It was a silver Honda Civic with hood damage.

When trying to stop the vehicle on East Clark near Highland Avenue, a white male driver and black male passenger ditched the car and fled on foot. Isaiah Biles, age 18 of Blaze Drive, was apprehended in the Evergreen Cemetary. The other suspect, 20-year old Charles Phillips the 2nd of Litton Avenue in Nashville, was arrested while hiding behind a home on Winfrey Drive.

While being questioned, Biles admitted to stealing the car and stated Phillips was in on it as well. Phillips refused to comment without an attorney.

Phillips was wanted by Metro Nashville Police on four warrants. Both men face charges of evading arrest and theft over one-thousand dollars. Phillips' bond was set at 73-thousand dollars while the bond for Biles is 19-thousand, five-hundred. Both men will be in General Sessions Court on June 7th.