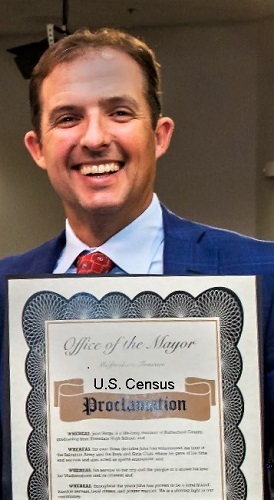 The 2020 Census is months away, but the U.S. Census Bureau is already hiring part-time local workers for the count. Interested citizens can join the 2020 Census team by applying online at www.2020census.gov/jobs. Serving as a temporary Census worker provides weekly pay starting at $21 an hour, flexible hours, and paid training.

Nearly $900 billion per year in federal and state funding is allocated to communities based on census data, according to the George Washington Institute of Public Policy. A full and accurate count of the population in Murfreesboro is critical to the City's share of federal dollars provided for community development, housing, education, transportation and social services. A precise count also provides meaningful data for municipal operations.

Mayor Shane McFarland issued a proclamation Sept. 19, 2019, expressing the City's support for the goals and ideals of the 2020 Census.

"The City of Murfreesboro will help promote the dissemination of the 2020 Census information to encourage resident participation, in addition to asking other government bodies to partner together to achieve an accurate and complete count so every Murfreesboro resident can truly say "Everyone Counts," proclaimed Mayor McFarland.

Mayor McFarland encourages citizens to participate in events and initiatives, including serving as Census workers, that will raise overall awareness of the 2020 United States Census and increase participation among all populations.

The United States Census Bureau is required by the Constitution of the United States of America to conduct a count of the population and provides an historic opportunity for Murfreesboro to help shape the foundation of our society and play an active role in American democracy.

Here are some brief facts on the U.S. Census:

The Census Bureau plans to hire roughly 2,000 people in Middle Tennessee but wants to hire workers who are residents of the city and county where they'll be working.

Workers needed include field operations and field workers. In addition to hourly pay, workers receive 58 cents per mile vehicle reimbursement. Temporary Census worker applicants can learn more about serving on the 2020 Census by calling 1-855-JOB-2020. Workers must be 18 years old.

For the first time, residents will be able to complete the census form online next year using a unique code or call the bureau's 1-800 number. Initial mailers will go out in March of 2020. The census is safe and confidential. The Census Bureau is strictly prohibited from divulging any personal data to outside parties, including other government agencies.