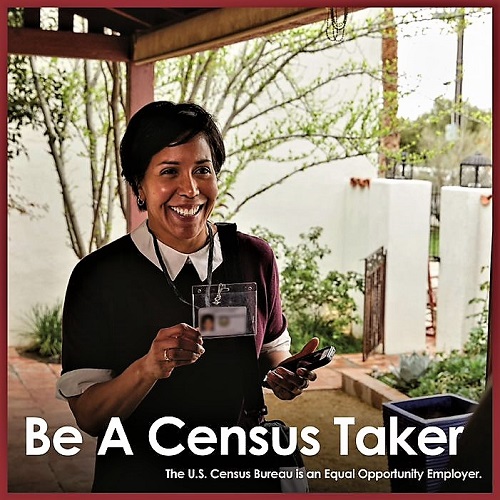 (MURFREESBORO) The U.S. Census Bureau is looking for workers to work on their schedule for positions with the 2020 CENSUS. In Rutherford Couny census taker positions pay $21 per hour.

The U.S. Census Bureau is looking for 16,000 people in Northern Middle Tennessee, and 58,000 statewide, to apply to conduct the 2020 Census. It is often described as the nation's largest civilian mobilization, but our economy has made finding willing workers a challenge.

"Like many employers across the nation, the Census Bureau is competing for workers in a tight labor market," said Michelle Archer, Assistant Census Regional Manager. "In an effort to make census jobs more competitive in this economy, we recently increased the pay rate for many counties in Tennessee. It is essential that we are able to hire enough people to ensure a complete count in the 2020 Census. Counting everyone is a very big job and requires many hands to make light work."

The Census Bureau uses data from the Bureau of Labor Statistics' Quarterly Census of Employment and Wages to derive individual pay rates for each county. Across Tennessee, most census jobs pay between $14 and $23 per hour and are paid weekly. All census workers also receive paid training and mileage reimbursement of $.58 cents per mile. Pay rates for different locations can be found at 2020census.gov/jobs/pay-and-locations.

"Our challenge right now is to get the message out that this work is short-term, and very flexible, and it pays well," said Archer. "Working for the census is something that people can easily do in addition to their other employment and responsibilities, and there is no big commitment."

Census recruiters have partnered with the American Job Centers to get that message across to potential applicants by holding job fairs across the 10-county Nashville Metro Region next week. Interested people can attend any of the following American Job Center locations from 10 a.m to 3 p.m Wednesday, December 18th to ask questions about census jobs and even apply online on the spot.

Working for the 2020 Census is more than an opportunity earn some extra cash after the holidays, it's a chance to help shape your community over the next ten years. The results of the 2020 Census will help determine our state's representation in Congress, as well as how certain funds are spent for schools, hospitals, roads, and more. This is your chance to play a part in history and help ensure that everyone in your community is counted.

Applicants can qualify for both field and office positions. Field staff such as census takers and supervisors will work right in their communities interviewing households that have not responded to the census online, by phone, or in writing. Most will travel to neighborhoods assigned on the day and time they are available including days, evenings and weekends.

The office positions, which are more limited, will be located in area census offices. The role of these offices is to recruit, select, hire, train, manage, and pay all office and field staff who work within the designated boundaries of the geographic territory assigned to the office.

The bulk of hiring will take place January through April with some jobs beginning in February and others will go from March through July depending on the workload in a given area. Beginning soon, census takers will work to collect information from group living facilities such as nursing homes and dorms.

In the spring of 2020, the Census Bureau will launch the largest 2020 Census field operation, known as Nonresponse Follow-up, Census Takers will knock on doors to follow up with households who have not responded to the census questionnaire. Most positions are anticipated to last eight weeks, but employment may end at any time or hours of work may be reduced if there is a lack of available work.

Most field jobs require employees to:

If you are employed elsewhere, your current job must be compatible with Census Bureau employment and not create conflicts of interest. These will be reviewed on a case-by-case basis. Also, you must not engage in any partisan political activity while on duty.

Hours for office positions are variable, depending on the availability of work. Most administrative work is done during regular business hours, but office employees may be required to work in the evenings and on weekends.

The application process is all online at www.2020Census.gov/jobs. The process should take about 30 minutes and includes assessment questions about education, work and other experience. Applicants will be asked to provide their Social Security number, a home address, email address and phone number, and date and place of birth.

Those who are being considered for a position will receive a telephone interview. If offered a job, they will receive instructions on next steps via email. When contacted, applicants will need to complete paperwork online and make an appointment to get fingerprinted for the background check. Once they are offered the job, there will be a period of time before their start date to allow time for the background clearance process. Applicants will then be placed in an applicant pool for 2020 Census field positions for positions they qualify for and will be contacted as work becomes available in their area.