Center for the Arts Presents Ragtime 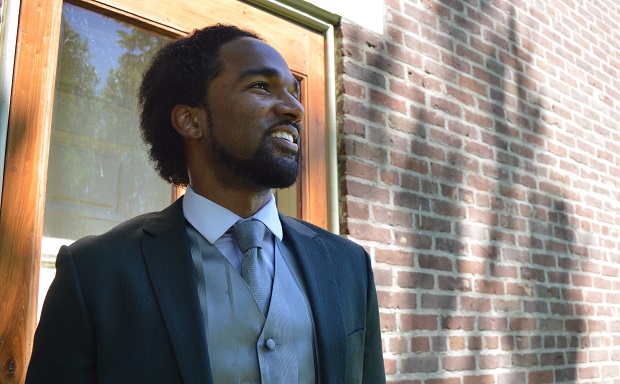 Ryan Richmond portrays Coalhouse in the Center for the Arts' production of Ragtime the Musical, opening July 7.

Center for the Arts explores what it means to be an American with its production of Ragtime on July 7-23. The Tony Award-winning musical with book by Terrence McNally, music by Stephen Flaherty, and lyrics by Lynn Ahrens is directed by Rachel Jones, a newcomer to Center for the Arts.

At the dawn of a new century, everything is changing... and anything is possible. Set in the volatile melting pot of turn-of-the-century New York, three distinctly American tales are woven together - that of a stifled upper-class wife, a determined Jewish immigrant, and a daring young Harlem musician - united by their courage, compassion, and belief in the promise of the future. Together, they confront history's timeless contradictions of wealth and poverty, freedom and prejudice, hope and despair, and what it means to live in America.

"It is a very challenging show and it has pushed and stretched me to become better - artistically and personally," said Ryan Richmond who portrays Coalhouse Walker. "Our country is divided in so many ways right now and the messages in this musical can easily relate to what is going on in the world today."

Opening night is Friday, July 7, where an exclusive season-ticket only event will be held in the art gallery prior to the show. Performances run Friday and Saturdays at 7:30 and Sundays at 2:00. General admission tickets are $15.00 for adults, $13.00 for seniors, students, and military, and $11.00 for children.

Groups of 10 or more receive a $2.00 discount per ticket. Tickets are available by visiting boroarts.org or calling The Center's box office at 615-904-2787. Center for the Arts is located at 110 W. College Street in Murfreesboro, TN.

The Center for the Arts opened to the public on December 1, 1995 and was originally funded by the City of Murfreesboro and Rutherford County. In 2008 The Center became a non-profit 501 (c) 3 organization and now depends on the generosity of the public for funding.

Since its opening, the Center for the Arts has been presenting theatrical productions, visual art exhibitions, music concerts, dance performances, and educational classes. For information, visit www.boroarts.org