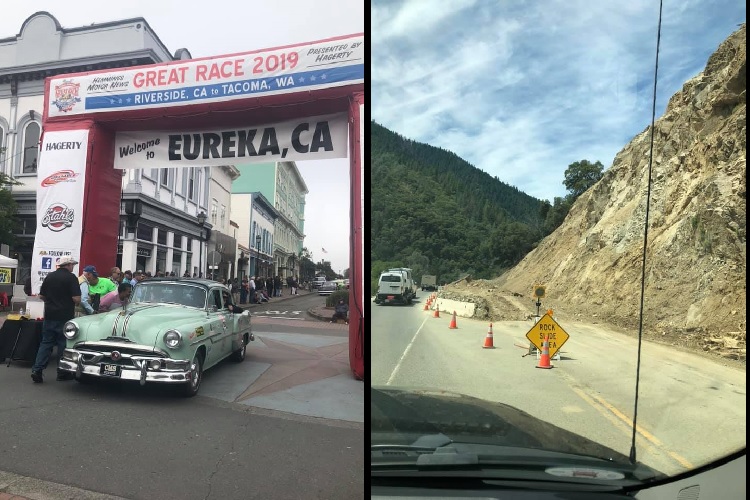 Central Magnet School's entry in THE GREAT RACE 2019 has moved up to position number 47 of 103 cars. This is the third year the local school has participated and is again using the 1953 Pontiac Chieftain.

The race "is not a speed race but a time/speed/distance rally," stated the 2019 Hemmings Motor News Great Race website.

The Central team left Chico and is headed to Eureka, California, which is on the coast.

Reports indicate that the team has a fun stop ahead atThe Chandelier Tree. Those accompanying the team report some pretty windy roads ahead with some switchbacks and pulling a trailer can make the trip a little longer than usual.

Culp reports, "We hit some construction along with a rock slide on top of a mountain (see photo) and met a foreman with the road crew who drove up and asked about our race and car while we were stopped. It's fun to share our story about the race and the guys! We passed through a little town called Willow Creek that had Bigfoot statues everywhere along with a museum so what did we do- we stopped and took some pictures."

The 2019 GREAT RACE started last Saturday in Riverside, California and continues for 2,300 miles to Tacoma, Washington this coming Sunday, June 30, 2019. This is a timed speed endurance race for vintage vehicles that are 1974 and older models.

CLICK HERE to see The Great Race route and schedule.