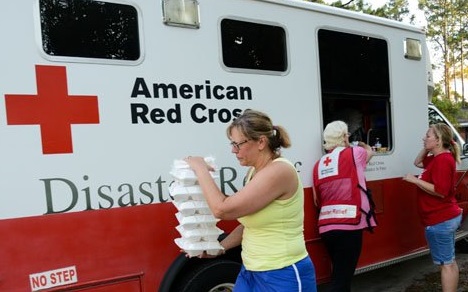 A spokesperson at the complex told WGNS, "The impacted families were allowed to go back into their units for a short time on Tuesday to see if anything could be saved."

She said eight of the units were a total loss and the remaining eight suffered heavy smoke and water damage.

The Heart of Tennessee Chapter of the American Red Cross is working closely with the displaced families. In addition, neighbors are donating furniture and other household items.

The Chalet Apartments is on Joyner Drive, between South Lowry Street and Enon Springs Road, next to Gregory Mill Park.

The spokesperson said the complex started with around 100 units, but a fire about this time last year destroyed the A and B buildings, and now building C was heavily damaged Monday night.

The cause of the fire has not yet been determined.

In addition to the local Red Cross's assistance in Smyrna on Monday evening, volunteers are closely monitoring the situation in Florida.

Red Cross Executive Director Kathy Ferrell told WGNS, "We are preparing to support our gulf coast neighbors as they brace for Hurricane Michael. Our Emergency Response Vehicle has left Murfreesboro with a team for resource positioning in the projected area of impact."

While the local Red Cross is heading south, approximately 120,000 Florida panhandle residents and tourists are leaving the area as Hurricane Michael.

Florida Governor Rick Scott said. "This storm is expected to be life threatening and extremely dangerous."