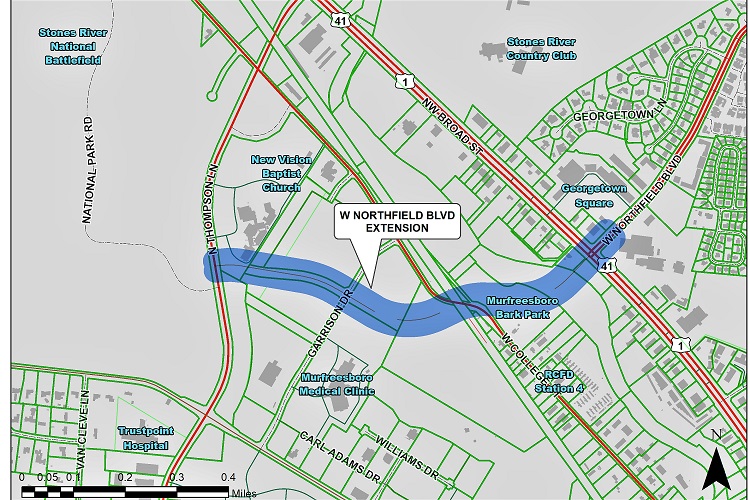 Murfreesboro Mayor Shane McFarland explained, "The agreement allows the City to acquire right of way for the roadway and purchase a construction easement for $5,815. It authorizes a property exchange agreement with New Vision Baptist Church for the extension of West Northfield Boulevard."

The extension from Garrison Drive to Thompson Lane is part of a contract agreement with Vanderbilt University Medical Center (VUMC). While most of the land for the extension is City-owned, a portion of project area near Thompson Lane is owned by New Vision Baptist Church and used for parking. The land exchange includes an area along Thompson Lane for an unimproved lot east of New Vision's campus. The City is also purchasing a required construction easement from New Vision.

The Murfreesboro City Council voted in March, 2018 to authorize the sale of 13.6 acres of City-owned real estate in the Gateway to VUMC. Vanderbilt broke ground in October and is currently building a Pediatric Clinic and Ambulatory Surgery Center at the site between New Vision Baptist Church and the corporate headquarters for Kasai North America. The Gateway Commission also voted to recommend the sale. The single story, 37,500 square feet Pediatric Clinic and Ambulatory Surgery Center is Phase I.

The extension of Northfield Blvd. to N. Thompson Lane is one of the "short-term" improvements contemplated by the City's 2040 Major Transportation Plan. As part of the land sale to VUMC, the City is accelerating the construction of the segment from Garrison Drive to N. Thompson to accommodate VUMC's proposed use of the property. Proceeds of the sale to VUMC will more than offset the cost of constructing this segment of the Northfield extension.

Council approved a contract with low bidder, Rawsco, LLC, Dec. 20, 2018, to extend Phase 1 of the Northfield Extension from Garrison Drive to Thompson Lane for $2.48 million. The roadway project is anticipated to be completed by December 2019.

Vanderbilt would initially employ 14 medical doctors and nurse practitioners and staff of between 40 and 50 people with a payroll of approximately $8 million. Phase 2 of VUMC development would expand the building from 37,000 to 100,000 square feet and add between 120 and 150 jobs with an estimated annual payroll of $24 million and a total capital investment of $51.5 million. This future phase is anticipated within the next 10 years.

Monroe Carrell Jr. Children's Hospital at Vanderbilt already has a Children's Specialty and After-Hours Clinic on Kennedy Drive off Medical Center Parkway which hospital officials say will not be impacted when VUMC opens the new facility on Garrison Drive in late 2019.