The Murfreesboro City Council reviewed design plans for the new Municipal Airport during a workshop meeting, Wednesday, Dec. 12. The new $4.5 million Airport Terminal will replace the old terminal originally built in 1952 with renovations in 1986. Plans had been reviewed by the Airport Commission on Nov. 19.

"The new terminal will be three times bigger than the existing terminal," said Murfreesboro Airport Manger Chad Gehrke (pronounced Gur-Key). "We want the terminal to present air travelers with the best impression possible and to fulfill the needs of a growing city for the next half-century." Gehrke also commented on the financial impact the local airport has on Murfreesboro and Rutherford County... 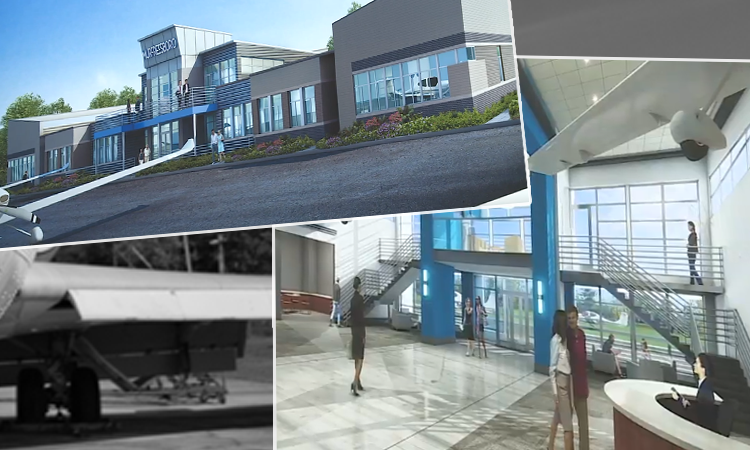 More on the Airport

Murfreesboro-based Smith Design Build, a commercial building contractor, and Nashville-based architectural firm Lowen+Associates, LLC teamed-up on the design to meet the unique needs of the municipal airport. The airport caters to the Aerospace Department at Middle Tennessee State University and Air Methods LifeFlight emergency medical transport for Vanderbilt University Medical Center. Murfreesboro has a land lease with TDK Hangar and will soon occupy a 16,400-square-foot hangar and 4,000-square-foot office space.

The main lobby area will feature a large BA Fan that mimics aeronautical elements possibly showcasing two mounted DA-40 or Cessna aircraft shells. The terminal will include a raised observation area with stairs leading to the main lobby and to an outdoor balcony. A catering kitchen with ample storage can serve a large leasable Business Conference Center accommodating 75 people. The Center will provide patrons with a view of the airfield.

"The goal is to be able to use the leasable space for catered events," added Gehrke. "We feel strongly that the business and higher education community will utilize this space as it is a focal point for air travelers and the first impression air travelers see as they visit Murfreesboro."

On the exterior runway side, a mezzanine extends outside to an observation deck to allow for easy-viewing of air traffic. On the land side, entrance to the terminal exterior includes multiple-vehicle parking around the existing circular area where the flag pole is currently located. Earth tones with accents in metal, tall glazing and brick create a feel for use beyond an airport terminal.

The Airport Commission first voted on developing a new terminal building in the summer of 2015, but rising costs of construction led elected officials and City administrators to reevaluate the architectural design and building process to maximize cost efficiency. Murfreesboro-based Smith Design Build and Lowen+Associates, LLC emerged from a field of ten applicants selected by the Public Building Authority.