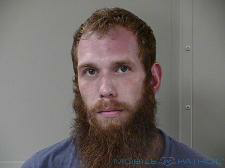 A 25 year old Murfreesboro man is facing four felony charges after police found a large amount of drugs in his apartment. The incident unfolded on Tuesday evening (July 5, 2016).

Police went to University Ridge Apartments on South Rutherford Boulevard during a "Patrol Check." Once at the apartment door, they observed a man and a woman waiting to get inside. The two said that they were waiting for their friend inside the apartment to answer after knocking. When the door opened, Michael Shane Ignatz was greeted by his two friends and MPD Officer Westley Hall. The officer wrote in a report that when the door opened, he could smell the odor of marijuana.

Apparently, Ignatz allowed for his friends to enter, but tried to shut the door before the police officer could make his way in. Officer Hall quickly placed his foot in the door to prevent it from closing and told Ignatz that he needed to step inside to talk about the smell of weed.

Once inside the apartment, Ignatz told police that they needed a warrant to search the unit. As the suspect turned to walk towards his bedroom, the officer told him to stop. At that point, Ignatz allegedly sprinted down the hallway yelling, "Get a warrant!" Officer Hall tackled the subject and they fell into the floor of a bedroom. The report that WGNS obtained shows that Ignatz resisted arrest and additional units were called in.

Once the situation calmed down and Ignatz was handcuffed, he told police that he would talk to them. That was when police started to calculate the vast quantity of drugs found inside the apartment.

As police were searching the property they noted that the cell phone belonging to Ignatz continued to chirp. Police wrote, "At least 2 messages received were people trying to but marijuana and Xanax bars from Mr. Ignatz." As police continued to read text messages after gaining consent, they found numerous texts regarding the sale of both marijuana and acid. The phone was then seized as evidence.

Ignatz was charged with:

The MTSU student was taken to the local jail and booked under a $25,000 bond. He was released on bond Wednesday night. He will be in court on September 29, 2016.