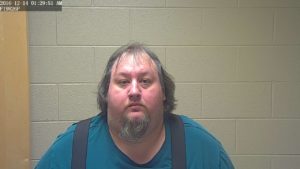 On Tuesday (December 13, 2016) Christopher J. Gibbs was charged with aggravated child abuse or neglect (Haley's Law) and domestic assault. The man allegedly became angry with his 4-year-old daughter, apparently struck the girl numerous times and allegedly left marks on her back and knees.

The mother of the child tried to stop her husband, and she was allegedly hit in the head with a belt buckle.

Gibbs, age 44, of Manchester was arrested by Coffee County Deputy Shaun Greene and booked in at the Coffee County Jail under a bond of $15,000, and he'll appear in court on Thursday.