Coffee County woman charged in death of her newborn 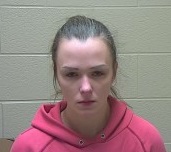 A Coffee County woman has been charged in the death of her newborn. WGNS' Ron Jordan has the details...

More news on this story:

A 28-year-old Manchester woman is being held in the Coffee County Jail under a $50,000 bond for the death of her newborn baby.

One of the assault charges, was for assault which resulted in the death of the baby, and the other was assault with serious bodily injury. She was indicted by the January term of the Coffee County Grand Jury.

According to Coffee County District Attorney Craig Northcott, Evans is accused of using methamphetamines while pregnant.

"The baby lived approximately an hour after being born," Northcott said.

According to the district attorney, after the infant's death, her body was transported to the State Medical Examiner's Office, where an autopsy was performed to determine the cause of death. Northcott said that the autopsy showed the baby had a high level of methamphetamines in her system and that was the cause of death.

According to the prosecutor, Evans has other children who are now in custody of the Tennessee Department of Children's Services.
This is the first time charges like this have been filed in the State of Tennessee.