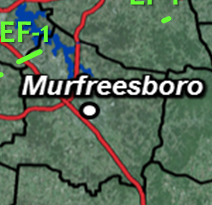 The National Weather Service has determined Rutherford County was indeed struck by a tornado Wednesday morning. A survey of the damage by NWS meteorologists determined an EF-1 twister traveled just over four-and-a-half miles from five miles northwest of Nolensville to four-miles north of La Vergne.

The maximum width of the twister was 200-yards and was on the ground for six-minutes between 7:11-to-7:17am. The tornado, which had peak winds of 90 miles per hour, touched down near Cane Ridge Park in extreme southeast Davidson County.

It caused mainly tree damage as it raced toward the northeast. It hit the Four Corners Marina around 7:17am in La Vergne, causing extensive damage to docks, boats and shelters.