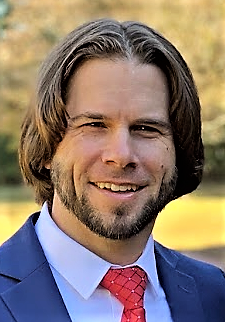 Brooks said, "I am proud of Ben and look forward to a long and productive professional relationship with him here at Rutherford County."

County Mayor Bill Ketron noted, "Ben's accomplishment not only reflects positively on him as an individual, but it also speaks to Superintendent Brooks' support of professional development within his department."

A 2013 graduate of Utah State University, Friend received his Bachelor of Science in Civil Engineering. He has worked with Rutherford County since July 15, 2019.

Prior to his employment with the County, Ben worked for the Tennessee Department of Transportation (TDOT) Construction Division and served a four-plus year apprenticeship under licensed P.E.s. He also passed two rigorous board examinations administered by the National Council of Examiners for Engineering and Surveying.

Ben Friend grew up at the end of a red dirt road in rural South Alabama and moved to north-central Arkansas in high school. He is the oldest of four children, with three younger sisters. His parents instilled in him a love and respect for sports and the outdoors, especially fishing (thanks to his Dad). Ben has two children - a 15-year-old daughter, Madeline Kate, and a 10-year-old son, Hayes McClellan. He has been married to his wife Callie since April 2018. As a family, they love spending time outdoors hiking, fishing, and enjoying time with their dogs. They enjoy watching sports, especially St. Louis Cardinals baseball and Alabama football. Ben also coaches his son's baseball team.